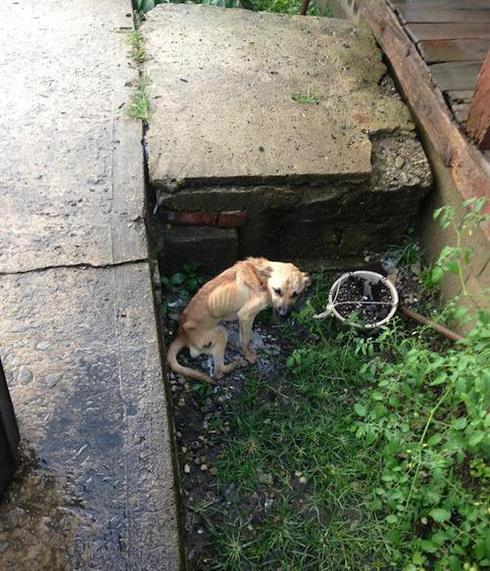 Note: Castle’s touching rescue story is from the DogHeirs archive and was originally published on DogHeirs.com in August of 2013 along with our exclusive updates from his rescuers.

“I don’t think he could have lasted much longer,” Lt. Castle told WKYT. “He was so malnourished that he couldn’t even use his hind legs. He was having to walk on his front paws.”

When Martin City PD couldn’t get a hold of a veterinarian or animal rescue, they put up a photo of the dog and message on their Facebook page asking for help. 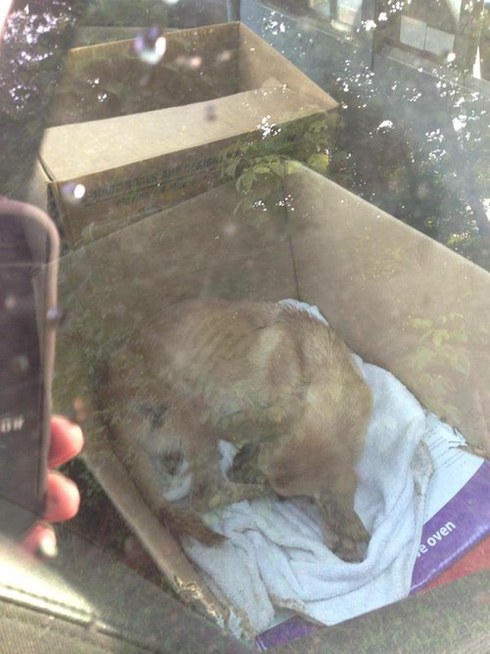 “Castle” on his way to getting help. Photo: Facebook/Martin City Police Department

Shauna Brown, from Floyd County Animal Shelter, immediately responded and came to the poor dog’s aid. She named the dog Castle after the man who saved him. She said that the 14-pound dog appears to have also been hit by a car in addition to having been starved and shot with a bb gun. She suspects he was a stray as he does not act like he’s ever had a home.

She posted a video of Castle on Facebook and wrote, “This is castle, the dog found by Martin pd. as u can see, he’s been starved so long that he pretty much drags his back legs and has a bb wound in the neck. He weighs 14 pounds. A big round of applause to the Martin officers for saving this baby. I’ve started fluids and treatment for the maggots in his wound. Hopefully he will make a full recovery.” 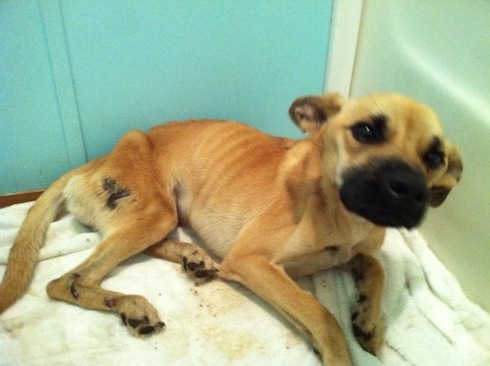 Shauna said they’ve already fitted him with a wheelchair but Castle did not respond well to it, so for now they’re focusing on getting him back to health. She said that once he’s better, they will place him in a home or find a rescue who will help find him a loving home.

After Castle’s initial rescue, Shauna provided update on his recovery under her watchful eye.

Castle appears to be feeling better today. This morning Castle snuck in and stole Shauna’s breakfast. She wrote, “mr castle must have his full appetite back as he just snuck in and stole my breakfast. Not the healthiest option for a dog in his condition but once it was in his mouth there wasn’t much I could do lol. His back legs r getting stronger too because they aided in the breakfast snatching.” 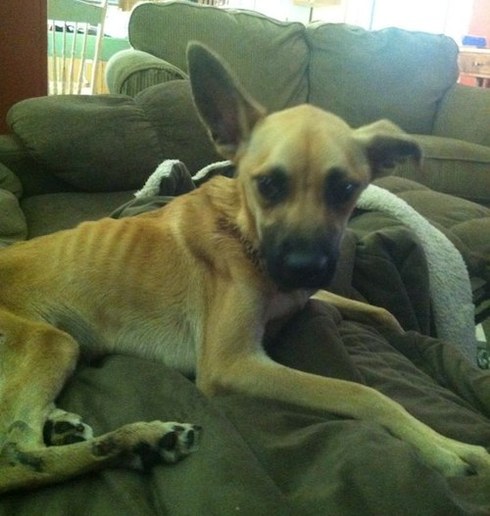 She also said he had a bath (doesn’t like them) and has gained a pound. “Well Castle has gained a pound! I know it doesn’t sound like much but with him being so starved and his body shutting down we had to start food slowly. Plus his tummy had shrank and couldn’t hold much at one time. So while a pound doesn’t seem like much, to us it’s a little victory! He goes back to the vet tomorrow for some more blood work to make sure his kidneys and liver are still functioning well and if everything goes ok then we can start with bigger meals and hopefully fatten him up.”

Castle has been to the vet for some more extensive testing. He is heartworm negative, which is good news. Bloodwork shows elevated liver levels due to the starvation but the vet said not to panic as it’s likely this is because he went so long without food and now his body has to get used to it processing it again. Castle is also anemic and has an infection, which are being treated with antibiotics. 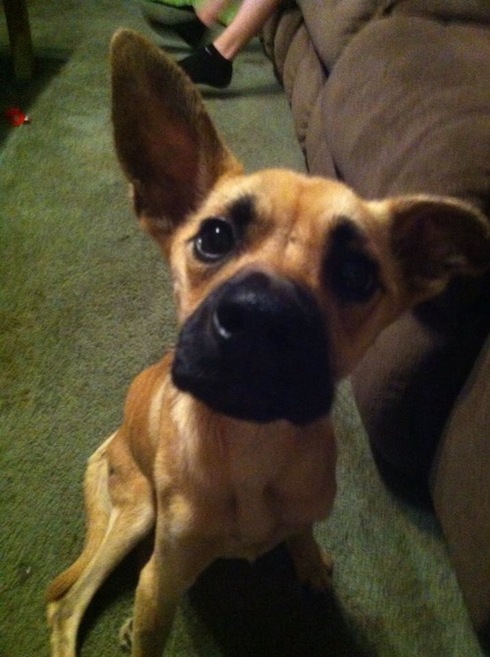 His X-rays show that he has had a fracture in his pelvis but it has healed. However his femur has been completely shattered. Doctors said he has to be careful with it, but it’s already begun healing. He’s on some pain meds to help this and plans are for him to get hydrotherapy to help regain the use of his back legs. But, overall Shauna said it was a pretty good diagnosis. Below is a video of Castle getting around using one back leg, but he gets tired very easily.

Sadly, a few days after his initial vet visit, Castle suffered a setback.

DogHeirs posted an update on Castle from Shauna this afternoon and it appears Castle has a setback in his road back to health. Shauna wrote, “Unfortunately he tested positive this morning for parvovirus and is in the doggie hospital so the donations are seriously needed and appreciated.”

Castle had tested negative last week for the disease so this has come as a blow to his caregiver. “As if he hasn’t been try enough already. Now this,” wrote Shauna. “As weak as he was already, I just honestly don’t know if he will make it thru. We’re starting meds now along with more fluids. He’s come so far. This just isn’t fair.”

But a few days later Shauna shared a positive update.

Great news! Castle has beaten his fight with parvo! Shauna posted the great news below in the comments section writing, “I have wonderful news. Castle has been discharged from the hospital and back here with me. He’s eating well and using the potty outside! Can u believe all the things that he’s overcome in his short life?”

A few days later, he was even better.

Castle is doing really well a week after being hospitalized with parvo. Shauna shared a video of Castle waking up and barking (see below). He’s begun to talk quite a bit. Shauna writes, “He started something new today. He barks! If you are eating he stares at you and barks til he gets a bite. If he hears my other dogs bark, he will bark too. And if anyone gets too close to my bed, he Really barks lol”

Castle is also enjoying snuggling up to everyone in Shauna’s family. She says, “Woke up this morning and couldn’t find castle anywhere. He either sleeps in my bed or on one of his beds beside of my bed and he wasn’t there. I looked outside. I looked in my closet. Finally I saw him sleeping soundly on my couch with Lucas! Don’t know how he got up there and Lucas didn’t know either so he must be able to get some bounce out of those back legs now.” 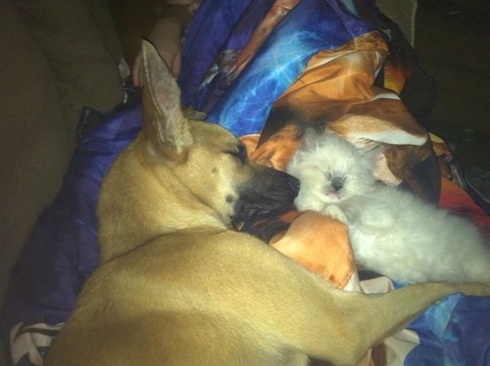 Castle continued to get stronger and Shauna shared two videos of Castle, showing him walking and running! She writes, “Notice how he’s trying to use the broken back leg. It used to hurt him and we gave him meds for it but he doesn’t act like he needs them anymore. Yes, it’s for sure broken. Shattered actually. And he just ate a treat lol… Today is a great day.”

In the second video below Castle runs!

Shauna says surgery on his leg may be something they consider at a later date. “Right now he just needs time to heal. I noticed him using it some today so he may be just fine,” she writes. “Also the pellet wounds have completely healed. He’s still at 16 lbs, which is still pretty decent since he got sick again and he went UP one of our steps!!!! He could always go down the steps but today is the first day that he made it up one without my help!!!! That’s a big deal for us!” 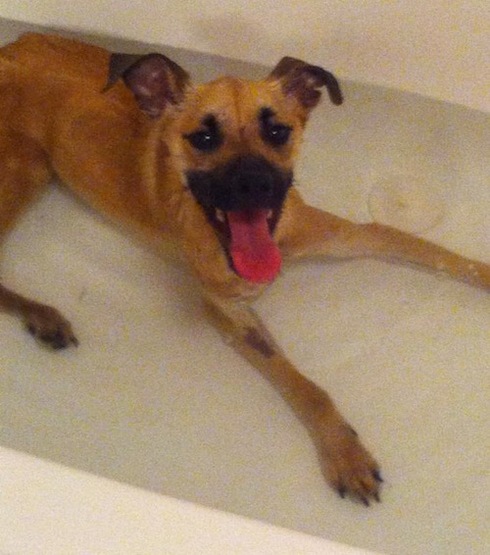 Castle now weighs 19 lbs and continues to regain his health. He’s gone to the vet a few times and had his back paw was wrapped a few days ago as it still wants to curl under. Shauna writes, “He’s using it more and more, especially if he’s running but sometimes when he’s slow he will still drag it.” Shauna also had a special announcement – Castle has been adopted by Laura Colter Gerard. Castle will be staying with Shauna for a while longer (through October) before going to his new forever home.

Castle’s new home will be in Upstate New York with 5 acres in the country. Laura and her boyfriend are both very excited that Castle is coming to live with them. Laura went to school and worked as a Licensed Veterinary Technician for many years. Castle will also have a cat and some free-ranging chickens for animal friends.

Laura’s previous rescued dog, Flea, passed away this past June. She had rescued him after he was abandoned on the side of a road with a broken leg in the middle of winter. It took her 2 months to get near him as he was terrified of people. “I could never replace him, but I have so much love to give to a dog who needs a wonderful home…” Laura writes, “I promise I will be a good momma & take good care of our boy- I love him already.” She adds, “I thank Shauna Brown for blessing me with this opportunity!”

On September 16 Castle got his bandage off his foot and proceeded to drag his paw on the sidewalk at work, making it swell and bleed. “No more work days for this boy! We gotta get that foot better,” Shauna writes. She took him to the vet and they decided to give Castle a special boot that will protect his leg and paw from dragging. 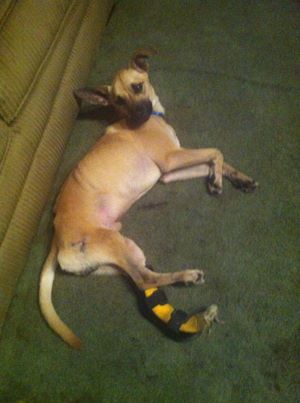 Castle with his special boot on his foot

Castle is on his way to his forever home. Two months after his rescue, Castle has made an amazing transformation and has healed remarkably under Shauna’s care. His cast is off his foot and he enjoys running and playing and he is no longer the starved, frightened and hurt puppy that Lt. Castle found abandoned and alone. 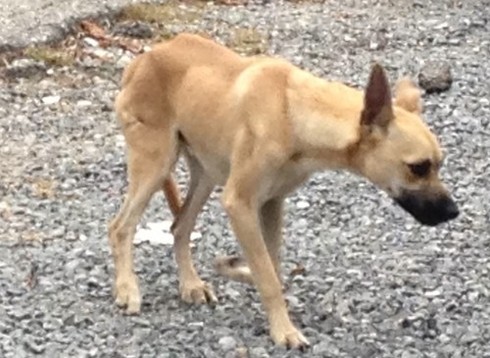 On their last night together Shauna wrote, “One more night to snuggle. His time with me has been very special. I feel honored to have met, and loved, such a precious soul. He may be leaving my home but he will never leave my heart. Cas, you are destined for great things, my baby. Thank u for showing up in my life. You have definitely made it better. I’m gonna miss little lamb.” 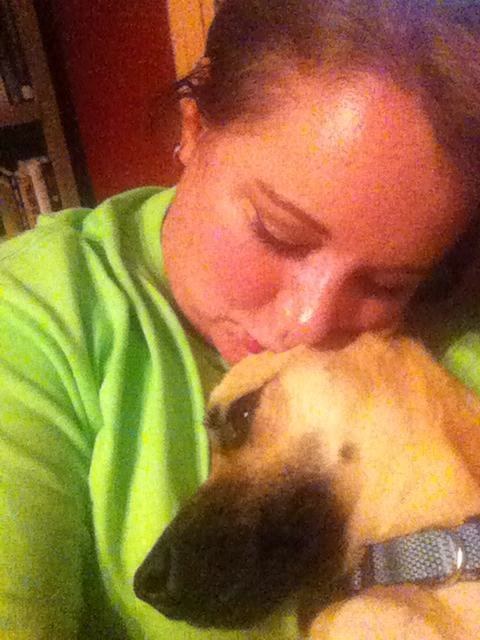 Shauna with Castle on their last night together

Castle’s new guardian, Laura Colter Gerard, picked Castle up on the weekend with her husband and wrote, “We LOVE him!! Thank you Shauna!! He is just the cutest little thing!! We are just hanging out in the backseat together…omg is he precious.”

And when they arrived at the hotel on the way home Laura wrote, “We are at the hotel-he ate his dinner and drank, and we played with his shark toy, ran all over the room like a little maniac!! Oh he is just precious!! Love love love!” 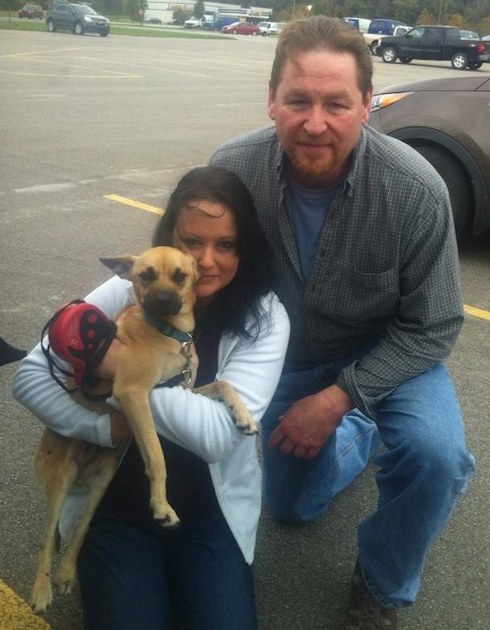 Castle being picked up by his new family

You can donate directly to the Floyd County Shelter via their Facebook page or sending donations to: PO Box 1502, Prestonsburg, KY, 41653, USA. Please include your name and mailing address with any contributions so that the shelter may send a receipt verifying that your donation was received.