When Ronda Brasher saw someone throw a bag out of their car window, she didn’t think anything of it until she saw what was inside the bag! She shared her dog rescue story on the day it happened with DogHeirs.com:

“Today i gained another member of the family. I watched a car in front of us on a country road toss out a grocery bag into a muddy flooded area. By the time we got there a puppy crawled out of the bag!!!! I fell in love with him, and I had to keep him.

“Took him to the vet, got his shots and him on worm meds. He has melt our hearts. Our other puppy which is an American Bulldog/Boxer mix just loves him and so does our 3 children.”

“It’s just terrible that people toss animals away like trash. I wish i had the jerk’s license plate number. But that’s ok, karma is sweet. And i know and promise to take care of this sweet little man. I just wanted to share my story and a pic of our new little cutie.” 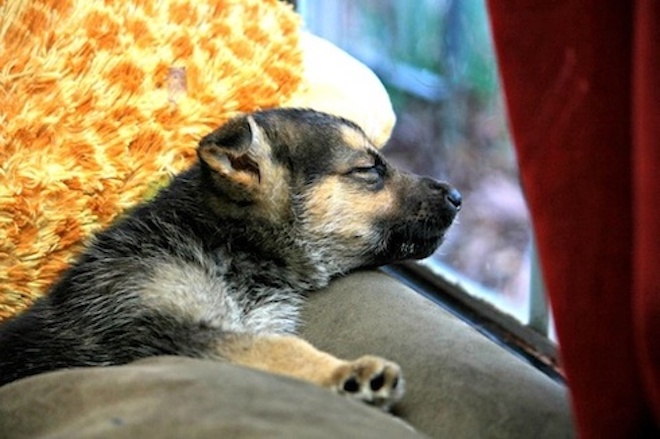 “The vet said he looks to be 6 to 7 weeks old. And thank you guys so much. I’m a softy when it comes to animals and they are my fuzzy kids. No way I could turn my back on them.”

~ Submitted by Ronda Brasher for our ‘Rescue Dogs are Family’ series.