Nic Restrepo says his 4-year-old Australian Shepherd Dog Bohlin lays his head on his wife’s belly and keeps his eyes open while looking around. Bohlin “really looks like he’s listening” and when the baby kicks “he keeps his ear right to the belly…!”

Bohlin’s recent attentive behavior is new to his family. Nic tells DogHeirs, “He never really laid his head on either of us like this… He actually always played this game of getting BARELY close enough for us to touch him, he loves doing that. But about 3 months ago, when the baby started really moving, this became his new thing, he automatically goes for the belly when she’s down.” 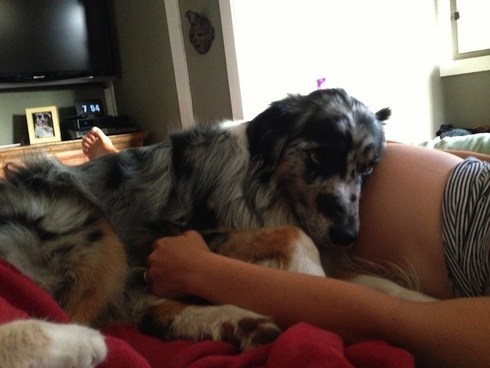 “My wife is 8 months pregnant now….This has been his favorite hangout for last 3 months,” Nic writes.

Nic continues, “First 2-3 months I didn’t pick up on any changes from him, not sure if I wasn’t paying close attention, but around 3 months we did notice the start of serious overprotection from him…. He’s very protective as it is, but this is another level.”

“He will do an innocent but obvious warning growl at strangers coming at her [his wife] too fast (friends of ours he doesn’t know), or stand between her and people in public places (something he used to only do on hikes or at home with strangers) I hear it’s very ‘ranch dog’ behavior with their ‘herd’.” 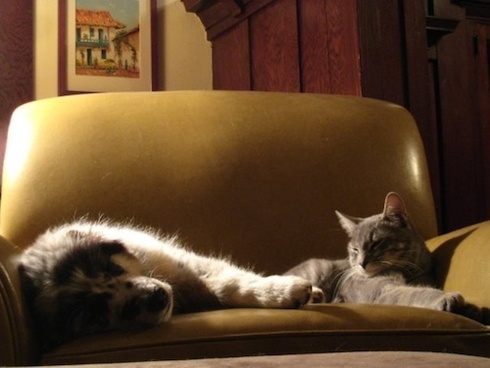 Nic describes Bohlin as “too smart for a ‘pet’.” He came from a cattle ranch in New Mexico where his parents and siblings are all hard working livestock dogs. So his work instincts are “ridiculously strong,” according to Nic.

“We take him herding up at a herding ranch in Acton, CA, about 45 minutes from LA so that he can get his working needs out of his system,” Nic tells DogHeirs. “His need to do SOMETHING every minute of the day gets calmed by it a little, we think.” 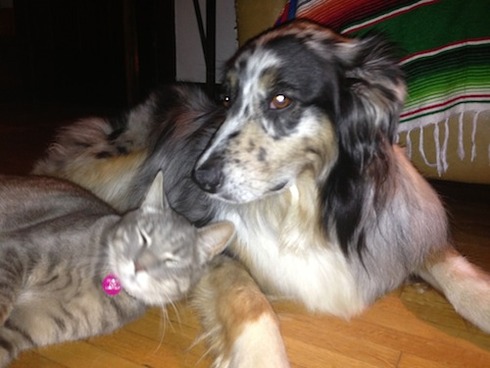 “He grew up with two cats that were barely a year old when he was 12 weeks old so his best buddy in the world is our male cat Peanut. Peanut goes and greets Bo first when he walks in the house, then us. They sleep and nap together A Lot…More like Peanut waits for Bo to plop down and he curls up in his belly.” 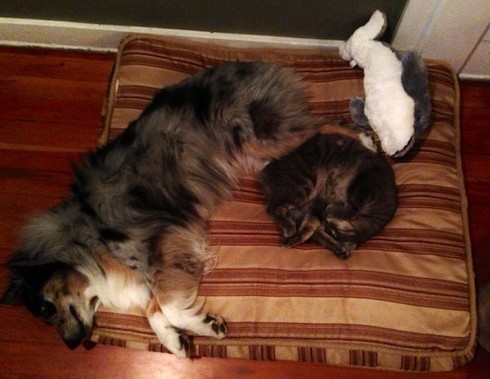 “The dolphin is the only toy Bo won’t destroy, going a year strong, he sleeps with it.”

You can also email your photos, videos and stories directly to us under the Subject “Dogs are family submission”.

Lonely and Sad Abandoned Dog Looking For Someone She Can Trust