A bus driver in Chile posted a video of a dog he discovered sitting on his bus, which has since been viewed millions of times. The driver is seen walking down the bus aisle only to find the dog sitting comfortably in a seat, looking out of the window.

The dog casually looks over at the driver and after getting a friendly pat on the head, turns his attention back to looking out the window. Moments later, the dog curls up for a nap. 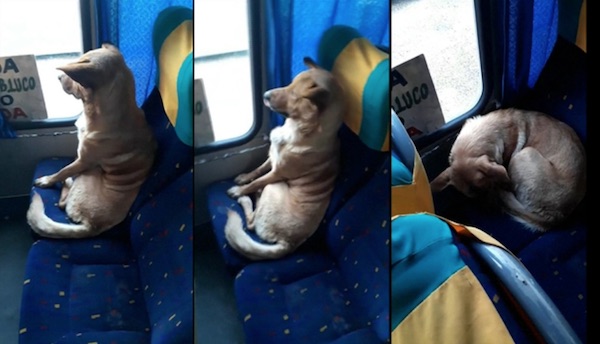 According to the Santiago bus driver, Cristhian Lizama Fuentas, the dog got on the bus with a man he thought was the dog’s owner. But the dog stuck around after that passenger got off and Fuentas reached his final stop. That’s when Fuentas realized the dog had hopped on all on his own.

Fuentas went to get the dog some food, but when he returned the dog had disappeared.

Fuentas later learned from other bus drivers that the very same dog has regular stops around town where he waits for the buses and then hops on for a free ride.

Funny Boxers Spooked By ‘Intruder’ in the Pool

Smart Labrador Retriever Figures Out How to Start Bath