After studying dogs for several years, a team of scientists in Europe observed that dogs preferred to poop with their body aligned along the North-South axis under calm magnetic field conditions. However, dogs did not have a directional preference when the magnetic field was unstable.

In their abstract published in Frontiers in Zoology, scientists from Czech University of Life Sciences and the University of Duisburg-Essen write:

“We measured the direction of the body axis in 70 dogs of 37 breeds during defecation (1,893 observations) and urination (5,582 observations) over a two-year period. After complete sampling, we sorted the data according to the geomagnetic conditions prevailing during the respective sampling periods.

Relative declination and intensity changes of the MF during the respective dog walks were calculated from daily magnetograms. Directional preferences of dogs under different MF conditions were analyzed and tested by means of circular statistics.” 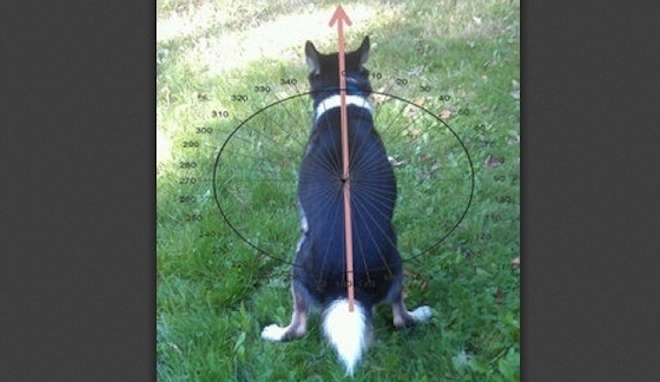 Based on their research, the scientists concluded that the dogs’ pooping behavior was predictable based on magnetic field fluctuations. The scientists were not certain as to why the dogs align at all and whether they do it consciously or unconsciously.

“It is still enigmatic why the dogs do align at all, whether they do it ‘consciously’ (i.e., whether the magnetic field is sensorially perceived (the dogs ‘see,’ ‘hear’ or ‘smell’ the compass direction or perceive it as a haptic stimulus) or whether its reception is controlled on the vegetative level (they ‘feel better/more comfortable or worse/less comfortable’ in a certain direction). Our analysis of the raw data (not shown here) indicates that dogs not only prefer N-S direction, but at the same time they also avoid E-W direction.”

Magnetic alignment has been observed in other mammals including cattle, roe deer and red foxes.  For instance, red foxes can detect field mice under several feet of snow by homing in on the magnetic field of the planet.

They use it to plan their trajectory to catch prey. And wolves have extremely large home ranges that indicate they have superior orientation abilities. Dogs too have extraordinary homing abilities which lead scientists to suspect that they also would have magneto-reception.

With this discovery in dogs, the scientists said it opens up new horizons in magnetobiological research.

Reference: “Dogs are sensitive to small variations of the Earth’s magnetic field” Frontiers in Zoology 2013.

Cocker Spaniels Say “Hello” To Fish In The Tub

Husky Wants Her Pig Friend to Wake Up and Play

Why Using ‘Baby-Talk’ Will Help You Bond with Your Dog