A Sheltie trekked an amazing 16 days and 23 miles in the dead of winter to get back home to her original family.

Gigi was originally owned by Bob and Marianne Anton and lived with two other Shelties, her father Mac and brother Jack. Gigi had lived with them since a puppy. But she wasn’t getting along so well with Jack so the Antons thought she might do better with another family.

Knowing that Dick Greene had recently lost his dog, and would offer Gigi a wonderful home, they adopted Gigi to him. But just one week at her new home, Gigi ran away. 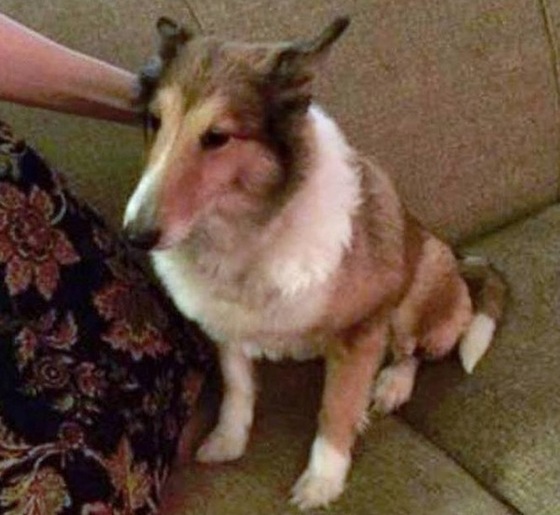 Dick, Bob, Marianne began to search for her. Along with their friends and families they searched for Gigi every day. Members in the community and animal control officers and police also helped when they could. The family scoured the woods and roads between New York’s Frankfort and Mohawk Valley after she went missing on December 18.

The Antons braved snow, ravines and chilly weather to find her, knowing if they were battling the elements so was Gigi. On January 1st they spent 7 hours searching the snowy woods. Marianne wrote on Facebook:

“Bob thinks he got quick site of Gigi before him and Jack (Gigi’s brother) slipped into the ravine! We were following her prints in the fresh snow. Toward the end of the day her foot must have split as she is leaving bloody paw prints. Hope this doesn’t attract predators!”

Over the weeks, Gigi was spotted by over twenty people, but being a timid dog, she always managed to elude pursuit.

Marianne and Bob were heartbroken. They knew Gigi was simply looking to find her way back home. Then on January 2nd, Gigi walked into their garage. Her 16-day ordeal was over and she had made it safely home after her long journey. Despite having lost some weight, she was in good health. 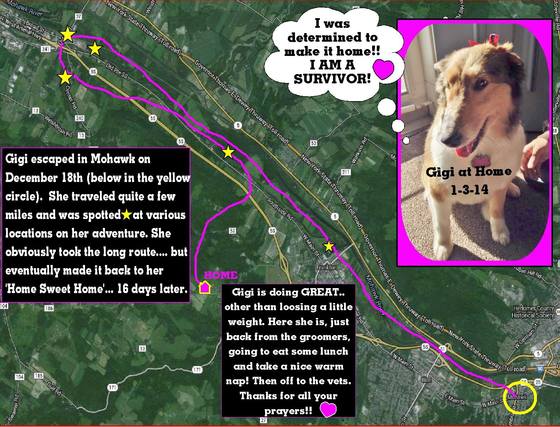 Gigi’s route home. Help Save Jack Facebook page writes, “You cannot tell by the photo and if you are not familiar with the area, her home is on Higby Road, which is a VERY LONG, STEEP, WINDING HILL, way up high above the valley, which the average person could not walk up and definitely never be able to ride a bike to get there. It is a whole other world up there, especially in the winter!!”

Everyone was overjoyed that Gigi had made it. Dick decided Gigi must go back to the Antons. Dick wrote:

“God led her back there. She belongs there… Marianne, I don’t know what to say except THANK GOD, You and Bob, and all our friends for being there for her!!! Most of all thank you GIGI for being the toughest dog I’ve ever known…BAR NONE!!! You knew where you wanted to be and nothing was going to stop you from getting there!!! I couldn’t be happier you’re where you want to be. You will always have a place in my heart as the dog I almost had…I LOVE YOU!!! And thank you to everyone for all your help and support!!!”

Marianne said her family is grateful for all the support they received from the community. She added that since her return home “no one messes with Gigi”. Gigi and her brother Jack appear to be getting along now and she is happily surrounded by all her loved ones.

Listen to an interview with Marianne telling the entire story on WIBX950 here.

These Photos From Dog Photographer of the Year Competition are Spectacular

Amazing Friendship Between Dog and Elephant Continues to Inspire