A Good Samaritan first spotted the sweet Beagle/Hound mix at a construction site. The remote location turns out to be a popular dumping spot for dogs. This particular dog, however, couldn’t stand up and the Good Samaritan learned she had been out in the cold lying in the dirt for a few days.

He went to take a look at her and saw that her “back leg was bruised, swollen and bent” and “her front leg on the same side was also bent and swollen.”

As soon as he saw her predicament he took steps to get her the help she needed. Stray Rescue of St. Louis described how they came to rescue the dog they call Polar Express. 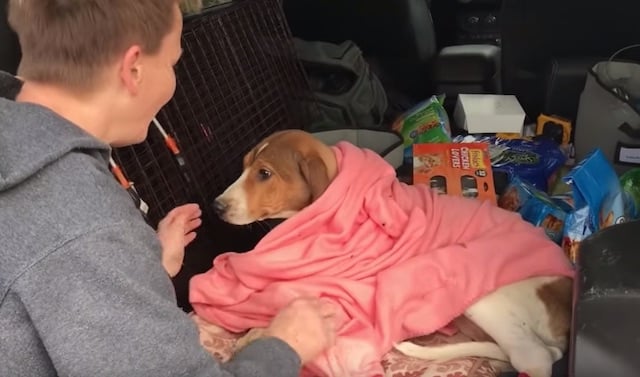 “We got there as quickly as we could. In the meantime, the caller had gotten a cushion, his coat and a blanket to make her as comfortable as he could. It was immediately obvious that she had two broken legs and according to the caller, there was nothing in the area but trains that could have hit her. We wrapped her in the blanket and lifted her in the jeep. She didn’t make a peep, just wagged her tail knowing she was safe.”

Once she was rushed to their emergency vet clinic, they learned the young dog (about 1 year old) had multiple fractures to her two legs. The damage was bad so they put out a call to raise funds for much-needed surgery to repair the damage.

“We have splinted both legs, but she’ll need to get specialty surgeries to repair her humerus and tibia,” they wrote.

Although Polar Express will have a long road to recover fully, she’s now in safe hands and will find a forever home when she is healed. If you would like to help with her medical costs, you can donate here.