Olive, Peach and Kiwi got an amazing surprise when DogHeirs community member, Nikki Cawley, and her husband, Jerome (who has active duty in the US Army) got the idea to buy 60 tennis balls for them to play with.

Nikki told DogHeirs, the idea came to them when they were shopping at Costco. “There was a large box of tennis balls on sale. It was a much better deal per ball than buying them in the smaller amounts, so we decided why not? My husband was dead set on giving them all the balls at once since we decided to buy the box.”

There was no special occassion as to why they got the tennis balls, it was simply a way to spoil their rescue dogs, one of whom had apparently never been allowed in the backyard and never had any toys when she was young.

Nikki described how her family pack came together:

“Peach came to us about four and a half years ago at 12 weeks old from my husband’s sister when Peach (then Apple) wouldn’t leave medical equipment alone. We happened to be moving into our first on base apartment at the time, so Peach made the long drive with my husband and all of our stuff from Los Angeles to Tacoma.  Before my sister-in-law adopted her from the Humane Society, Peach was found on the side of the road in a box with her siblings and mother.

“Kiwi (originally Haylee) came to us at six months old through a friend of a friend who no longer wanted a dog that had bounced on her toddler and knocked him over.  I was told (but never saw for myself) that poor Kiwi had only been allowed in the back yard and never had any toys.

“After we bought our house, we knew we wanted a third dog, so we had been searching rescues, the Humane Society, and the internet for someone that needed a home. When we saw the ad pop up on Craigslist as a 12 week old pit bull puppy for a very low cost, we knew she needed us or would likely go to a much worse fate. One picture of her cute white face absolutely sealed the deal.

“Luckily, we were able to scoop her up and bring her home within the hour. All I know about her previous life is that the people who met us in the Safeway parking lot for the trade off were teenagers. We’re pretty sure she’s not full American Pit Bull Terrier, as she’s only about 40 pounds and doesn’t really have that fat bully head…but you never know, she could just be the product of bad breeding.”

The photos below capture the joyous moment.

“Throw it! Kiwi and Olive wait for a ball to be thrown.” 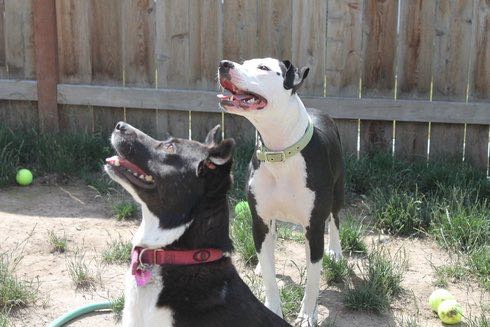 “The girls look on as my husband uses his Jedi powers to levitates some tennis balls.” 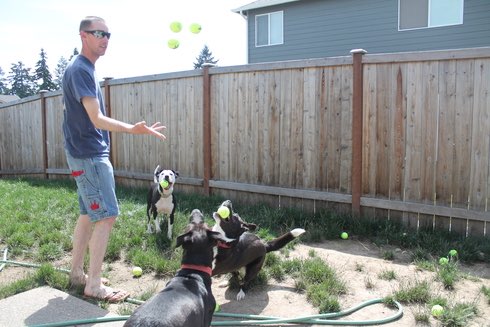 “Peach moves in to catch a ball.” 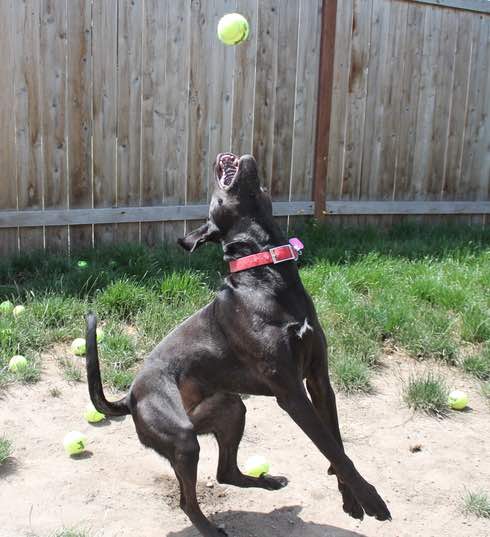 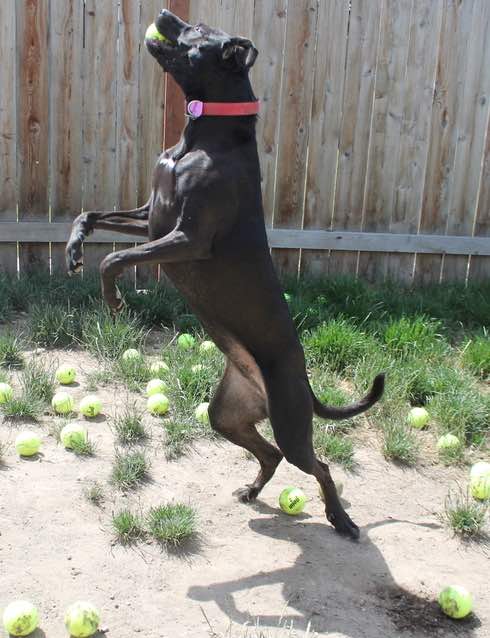 Another one to catch! 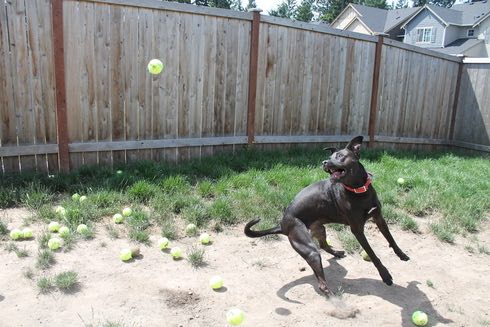 “Kiwi jumps for an array of tennis balls as Peach looks on.” 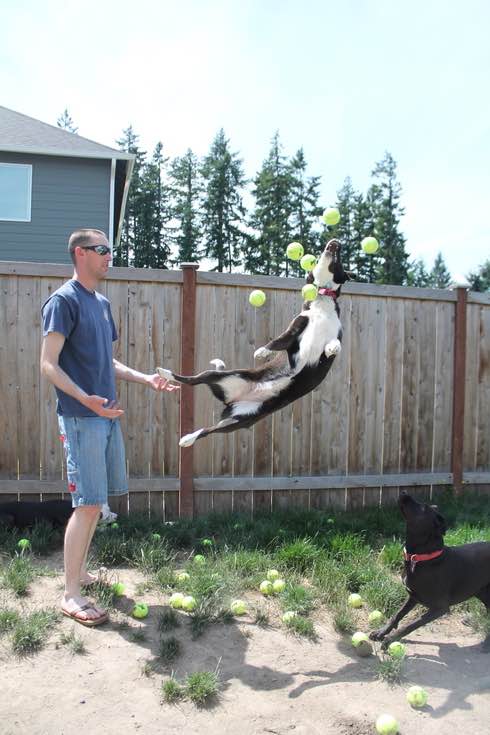 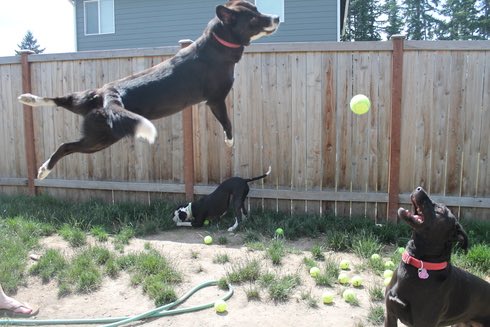 “Kiwi uses her signature bounce to go after a tennis ball.” 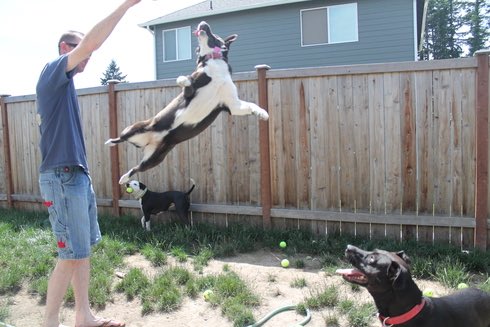 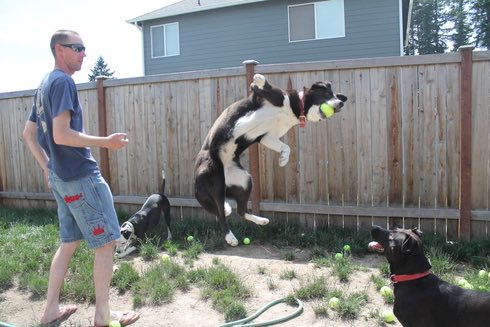 Kiwi has one ball and goes for another! 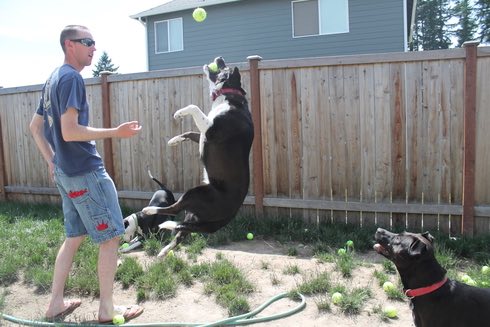 “‘Mine, all mine!’ Kiwi guards a stash of tennis balls.” 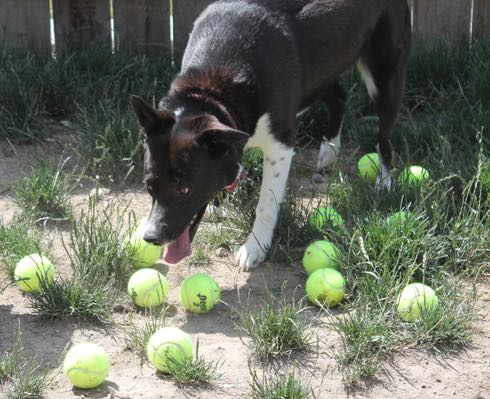 “Now tired from the excitement, Olive looks to me happily.” 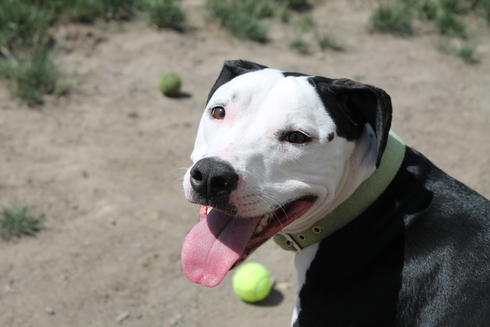 “Kiwi has had enough bouncing and relaxes in the shade.” 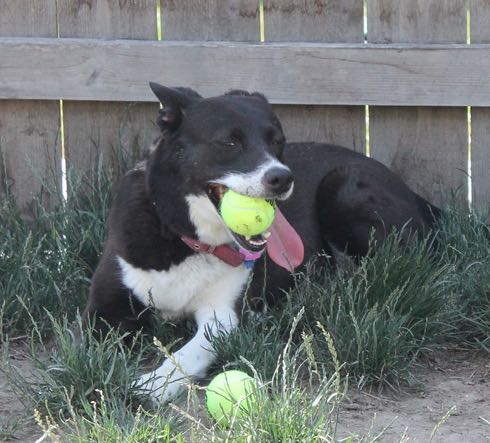 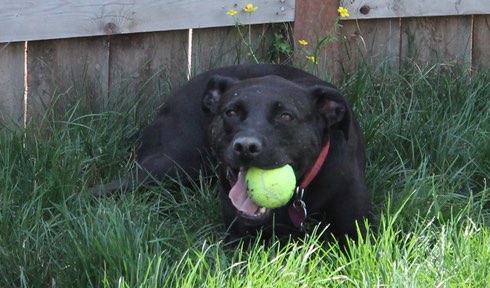 Did you like this story? Come back to DogHeirs.com shortly for more photos of the adventures of Olive, Peach and Kiwi.

Man Rescues Dehydrated Maned Wolf Who Collapses Under His Truck