A young Vizsla named Haarlem was caught “red handed” trying to escape her kennel at a doggy daycare much to the surprise of her human and caregiver. Andrew Koehler’s wife took a photo of the moment and it was posted to Reddit with the caption, “Went to pick up dog from kennel and found her like this…”

Haarlem was tenuously perched at the top of her fenced kennel by her owner and one of the staff at the doggy daycare. 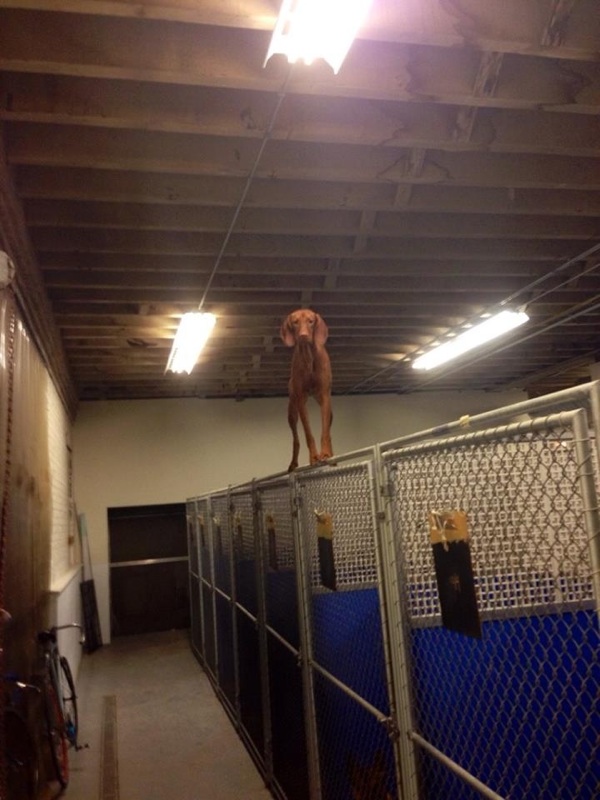 Andrew told the Good News Blog that their 13-month-old has a penchant for escape. “She is notorious there for a.) being completely insane, and b.) HATING the kennels,” he told the blog. “Normally, if we are late to pick her up, they put her in one of their big playrooms to hang out while they are cleaning, but this day, one of the new girls put her in a kennel with an open top.”

According to Andrew, when his wife went to pick Haarlem up, the new staff member at Canine Crews in Chicago went up with her. She was carrying a large stack of paperwork and when she saw what Haarlem had done she screamed and threw the papers into the air. They got help and Haarlem was safely lowered to the floor. She was perfectly fine, despite her “high-flying” antics.

No doubt Haarlem’s adventure will be the talk of the daycare for a long time to come!

‘Velcro’ Vizsla Stops Her Mom From Reading to Get Hugs