A homeowner “was just horrified” when he reviewed his security camera and saw a woman dumping a dog on the side of the road in his neighborhood. His fast actions have lead to the arrest of the suspect and the dog’s rescue.

The video Glenn Blake of Greene County, MO, posted to social media shows a Jeep Renegade pull to the side of the road. Shortly after a red/tan dog is let out of the back of the vehicle and the dog is seen walking around wagging her tail.

After dumping the dog and picking something up that fell out of the car, the person gets back into the vehicle and drives away. The dog is seen confusedly running into the street and then after the car.

Blake posted the video to Facebook shortly after watching it and calling the Green County Sheriff’s Office.

He wrote, “Person dumping dog in our neighborhood this morning 10 July at 10:13. Please share.” He updated the post soon after:

“I had no idea this video would spread so fast and so far. Here is more information all in one place. This is at Farm Road 148 and Farm Road 205. Three miles east of Springfield, MO just off of Hwy D. The Greene County Sheriff’s Office was notified.” 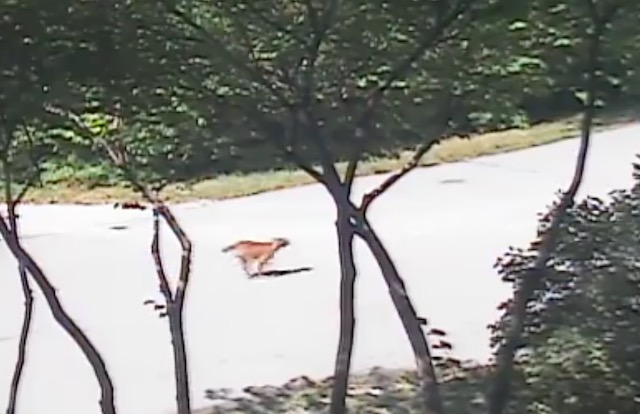 “Deputy Turner was able to locate the dog. At this point the poor dog was getting dehydrated and weak. The Deputy was extremely concerned and caring and provided the dog with water and comfort.”

“The temperature reached 96 degrees today. GCSO called Rescue One and they promptly arrived to care for it.”

A week later the woman suspected of dumping the dog is in jail, the News-Leader reported. Ashley Nicole Devine, 26, was arrested and charged with misdemeanor animal neglect and abandonment.

“Really, all the credit should go to Deputy Turner,” Blake told the News-Leader. “He went out of this way to find the dog, get ahold of it, get it cooled off and get it water. And the adoption agency (worker). Kudos to both of those people.”

The dog, now named Hope, is safe in foster care with Rescue One. She was badly dehydrated and suffered burns to her paws from the hot pavement, but otherwise she’s doing well.

In an update to his post, Blake said, “The dog is doing great and there are multiple offers for adoption.”