Coyotes are a common wildlife species throughout North America. The coyote (Canis latrans) is a member of the dog family and has adapted well our urban landscapes and appears to be equally comfortable living in city suburbs as they do out in the wilderness.

Knowing what to do to help protect your dog from coyotes is increasingly important, so here are a few helpful tips.

Coyotes have a home range territory of about 20 square kilometers (8 square miles) and can be spotted anytime of the day, but are most active at night when they go in search for food.

Coyotes prey on deer and livestock but will also scavenge on dead animals and eat insects, rodents, rabbits and small birds.

In urban areas, coyotes will take advantage of unsecured garbage or pet food if these attractants are left outside. They are also known to kill or injure pets, especially small dogs or cats when they enter populated areas. It is the adaptable quality of these predators that often leads to conflict with humans.

Coyotes breed annually during winter months, between January and March and are more active during these months, as they scour for food in preparation for their litter.

Mated pairs can remain together for up to 12 years, and on average, six pups are born in April or May. Litter size depends on population density and available food sources during the breeding season. 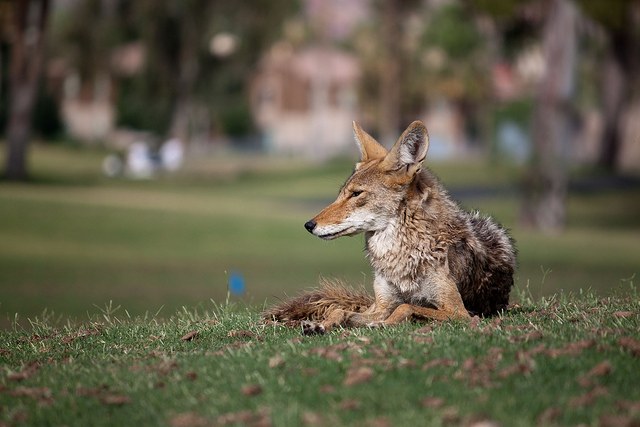 Prevent Coyotes from Getting Comfortable in Your Neighborhood

Wild coyotes are naturally curious, however they are timid and will usually run away if challenged. Coyotes start posing a risk to people when they lose their timidness and become comfortable around humans which is usually a result of direct or indirect feeding by humans.

A few precautions and good, old-fashioned common sense will help minimize conflicts and encounters with coyotes in your area.

People in residential neighborhoods need to work together to ensure that coyotes don’t start to feel comfortable living in their neighborhood.

Coyotes that are rewarded through direct or indirect feeding will eventually loose their fear of humans and begin to see humans, their yards and their pets as food sources.

A coyote that is comfortable in one person’s yard is going to feel comfortable in everyone’s yard. So become proactive in your community by helping to educate neighbors and residents about coyotes. Here are some tips: 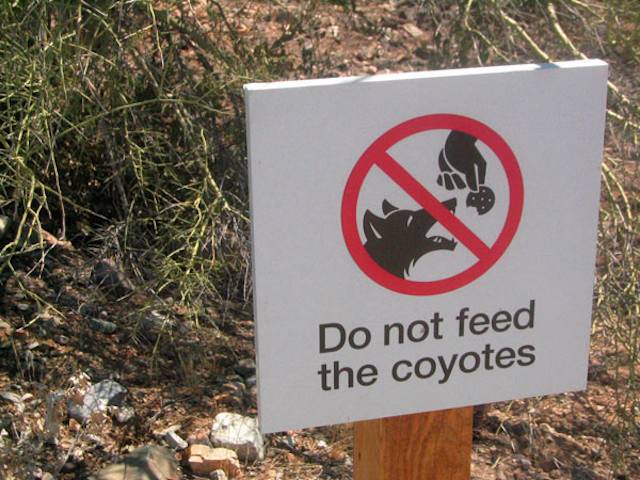 Keeping Watch Over Your Dog

Coyotes pose a lesser risk to large dogs, unless there is a pack of coyotes involved. Usually small dogs are targeted, so they should be monitored more closely if there are coyotes in the area. However, as mentioned, some coyotes work in packs and can be a threat to any size dog.

If You Encounter a Coyote

Most coyotes will keep to themselves. But on occasion a coyote may demonstrate no fear of humans. However, keep in mind it is not normal for coyotes to attack or pursue humans, especially adults. If it does display such aggression, it is most likely sick. 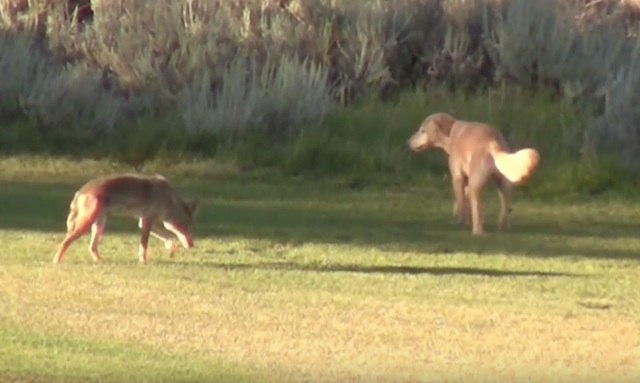 If You Suspect a Coyote is Sick

They are also susceptible to sarcoptic mange, These diseases and parasites can be transferred to dogs and cats coming into contact with an area where an infected coyote may have lived or sought shelter (e.g. a farm’s straw bedding, hay bales, etc.).

Other common parasites which can affect humans or pets include heartworm, hookworm, and tapeworms.

Also, be sure that your dog has all its current vaccinations, to protect your pet from potentially picking up an illness from a wild animal.

We hope these tips help keep your dog safe from any possible coyote encounter.

CPR for Dogs and Cats

Man Thought He’d Never See His Dog Again, Then He Followed This Tip And Found His Best Friend

Heartworm: How One Mosquito Bite Can Kill Your Dog

Teaching Your Dog to Come When Called – The Recall Command