A family’s pit bull stopped two armed robbers from stealing their 3-month-old baby. Nayeli Garzon-Jimenez and Adolfo Angeles-Morales were on the phone together on Tuesday when a man and a woman broke into their home while Adolfo was at work.

Nayeli heard a sound from the kitchen door and saw a man and a woman break in through the door. Adolfo listened to what happened on the phone, “I hear the noise over my phone and she started screaming and crying, and said, someone just stuck their hand in the door.”

The man demanded she give them money or they would take the baby. Nayeli indicated she did not have any money so the woman grabbed her baby from her arms.

Nayeli’s husband Adolfo said, “She fought with the lady, because she tried to go by the kitchen, and she held her by the shirt. Then guy come back and hit her with a gun.” 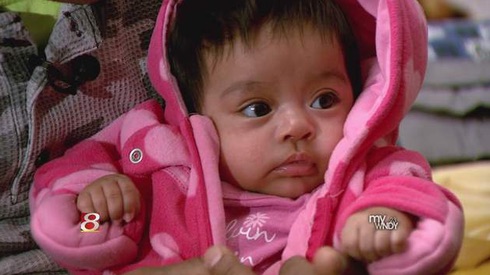 The woman turned around and ran towards the front door and threw the baby back in Nayeli’s arms.

Nayeli and their baby girl were taken to hospital and looked over. Mother has a bad bruise and cut on her forehead from where she was hit with the gun, but she and her baby are all right and safe at home thanks to their dog defending his family home.

Police are looking for a 35 years old black man, 6-foot-2, heavy set with light skin, a close-cut beard and acne scars. The black woman is described as in her mid-20s about 5-foot-10, heavy build with braided hair pulled back in a ponytail and is considered armed and dangerous. She had two lip piercings and an eyebrow piercing. The break in occurred in the 4900 block of West Regent Street in Indianapolis, Indiana. The suspects fled the scene in a 2002-2007 chocolate brown van with tinted windows and windows that extend down the passenger side. Anyone with information is asked to call IMPD at 317-327-3475 or Crime Stoppers at 317-262-TIPS.

Wounded Dog With Just Hours To Live Hides Away In Home