Hundreds of dogs die from raiding the trash and getting their head stuck in empty chip bags. If it’s not a family dog, it could be a stray dog or animal who gets their head stuck. That happened to a homeless puppy recently and if it hadn’t been for a passerby the dog may have died.

Empty bags that contain chips, nachos, popcorn, pretzels, cereal, dog treats and other snacks can be deadly because these mylar-type bags create a vacuum-like seal around a pet’s neck and it tightens as he/she tries to breathe.

This type of pet suffocation is a real and dangerous threat to dogs, yet many dogs die because people simply do not know how dangerous these empty snack bags are. Even worse, some people reinforce the dog’s behavior by “rewarding” their dogs for being cute or funny after sticking their heads in the bags.

It only takes a few minutes for the oxygen levels to be restricted to fatal levels for your pup.

If these bags are not disposed of properly and are left within reach of a curious pup the results can be tragic tragic. One reddit user recently shared her terrible experience and wrote:

“My dog just suffocated the other night by sticking her face into a thick, foily type, empty bag of chips. My boyfriend and I went out to let a family member’s dogs outside for the night, before going to bed. We drove 5 minutes away and weren’t even gone for 20 minutes at the most and when we came back my mother told me my dog had died.

“My brother who was only a few rooms away heard nothing, and they tried to help her, but it was too late.

“PLEASE, when you finish eating chips or have empty cereal bags or even dog food bags, cut the bags straight down the sides to that the plastic or whatever material is flat and can’t wrap around your pet or even child doesn’t suffocate.”

“My dog got into a bag that I carelessly left out and suffocated. If I had been more aware of the danger I wouldn’t have left the bag. Instead I would have taken the time to cut the bag so that it was a flat piece and then thrown it away, thus eliminating the dog from ever suffocating even if they got into the trash bin.”

Just as you would childproof your home and never leave plastic bags lying around babies and toddlers, the same rule needs to apply to any food bag if there are puppies and dogs around the house.

Chip bags are not the only danger. Cereal bags, snack bags, popcorn bags, dog treat bags – any bag that contains a food item could potentially be a hazard.

Christina Young learned this after her family discovered her dog Petey dead on the floor.

Christian beat me home from work by about 10 min & was surprised when Petey didn’t greet him at the door like usual. As he walked in further he saw our sweet boy laying lifeless with a stupid chip bag over his head,” she wrote. “He was able to get them off the counter that we will forever blame ourselves for leaving out. He ate every chip out but of course went back for crumbs… with there being nothing left inside every time he would go for more he would inhale making the bag tighter & tighter around his head.. ultimately resulting in suffocation.”

“Petey was SMART so I didn’t understand why he couldn’t get it off with his paws. But after doing research the stats on how often this happens is shocking. 3-5 pet suffocation’s get reported every week and 42% of those occur while the owner is in the next room. It only takes about 3 minutes for their oxygen to drop to fatal levels.

Prevent Pet Suffocation is an organization trying to raise awareness of the issue, which is not as widespread as it should be. Many pet owners are sharing their tragic stories, and you just have to read a few, to realize how important this safety tip is! 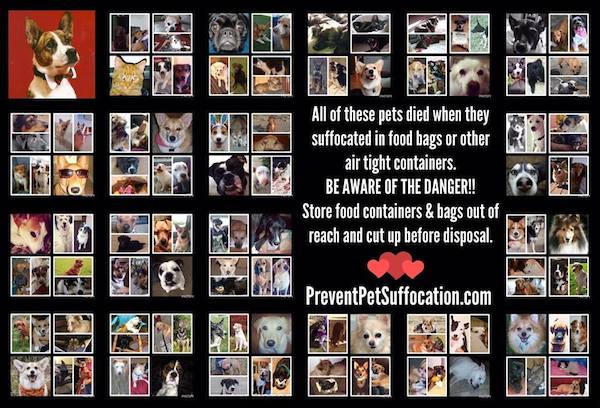 Here’s one story Prevent Pet Suffocation shared on Facebook of a family who didn’t leave the bag lying around, but it accidentally got loose from the garbage bin:

“The Tueller family is beyond crushed after losing their new puppy, Jarvis, when he suffocated in a Cheetos bag on Tuesday. The children are having an especially hard time. Amy Tueller says, ‘Today, June 2, 2015, our beautiful champion Labrador, Jarvis, was found dead at 11 weeks by our 14 year old son. He had suffocated from sticking his head in a Cheetos bag and not being able to remove it.” 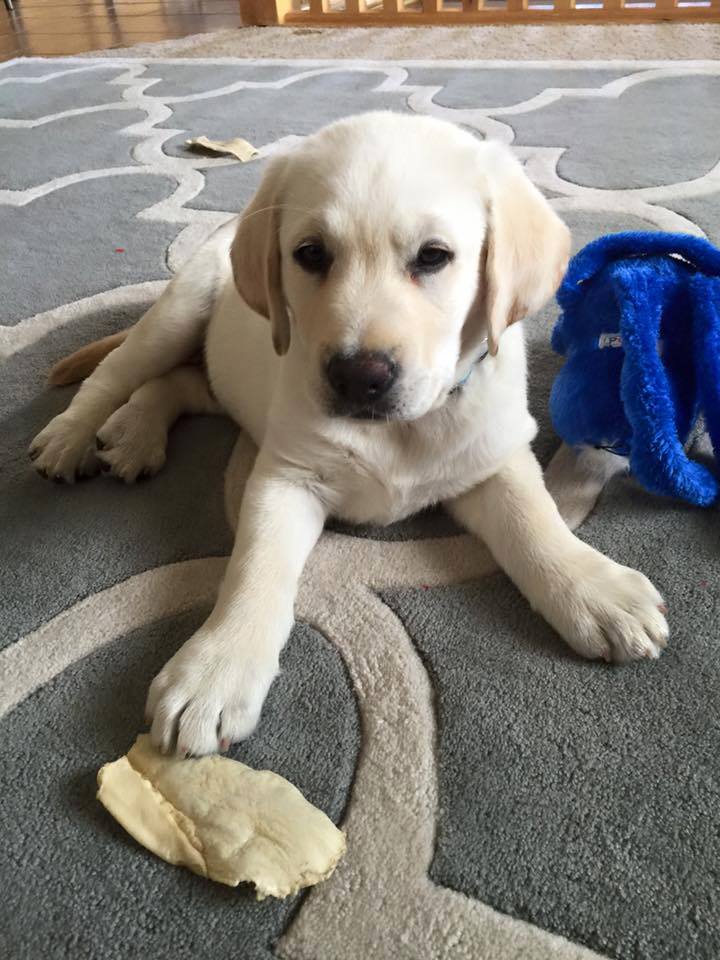 “‘We were not even aware this could happen and are so devastated. I took to the Internet to see how common this was. I’m so upset and wish I would have just checked on him a bit sooner. His body was still warm. We attempted CPR but he had passed. This loss has ripped my heart out and if we can prevent this from happening to another family it’s worth sharing this awful experience. The bag must have blown out of the trash can into our backyard.’ 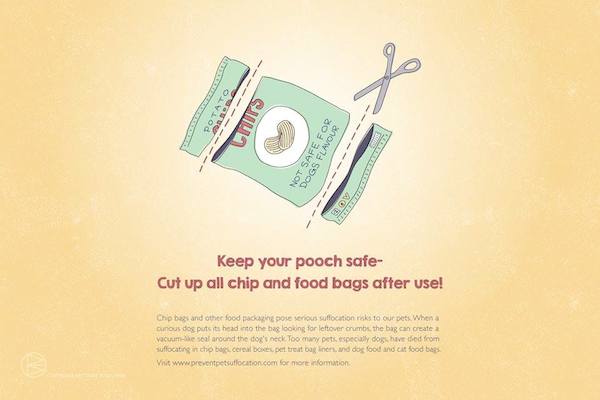 By simply tearing up or cutting these bags up before throwing them away, you could end up saving a pet’s life or the life of another neighborhood pet. Please ensure the safety of your loved ones and the animals in your community and dispose of these bags effectively.