It’s no mystery how much dogs love to sleep in the same beds as their humans. Whether it’s because of their puppy-pile pack instinct or because they simply like to cuddle, if they can share the bed with you, they will.

One dog owner discovered, however, that this can sometimes mean not getting much sleep.

Dan Huang is a Golden Retriever who is treated very sweetly by his dad human.

In this cute video, dad is often squished to the wall by his cuddly canine. So much so that he can’t even turn over!

So in an effort to sleep in more comfort he purchases a large dog bed and puts it right next to his.

His dog is a bit confused by the whole thing. 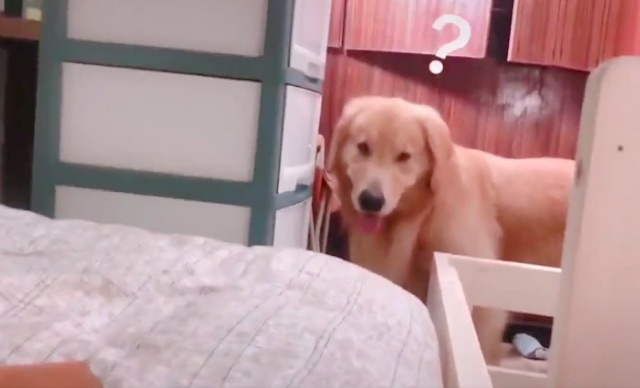 Everything should be okay now, right?

Well, it starts off well, but things don’t quite go as dad expects.

It looks like dad will need to get an even larger dog bed – for himself! He should probably know his dog would outsmart him. After all, experience shows that he can’t get the upper hand. Just take a look what happened when he shared a with his two dogs. The result was equally sweet and hilarious.

Goofy Bulldog Mom Plays Along with Her Sassy Puppy