Dozens of animals, including 17 dogs, got a helping hand from a man who went to help a friend rescue his animals from the California wildfires and ended up saving a whole lot more.

Dan Sauvageau is a developer from Roseville, California. He drove to Magalia in Butte County in a heavy-duty truck with a 16-foot-long livestock trailer to help his friend evacuate a donkey, a cat, a dog and three goats.

But while on their way, locals asked him to assist with evacuating other animals rescued from the fire. Being an animal lover he couldn’t say no and in one trip he picked up over a dozen dogs.

In the video he shot he approaches a volunteer carrying some food with a pack of dogs following after her.  He asks the dogs “are you ready to go” and they certainly look like they are ready! 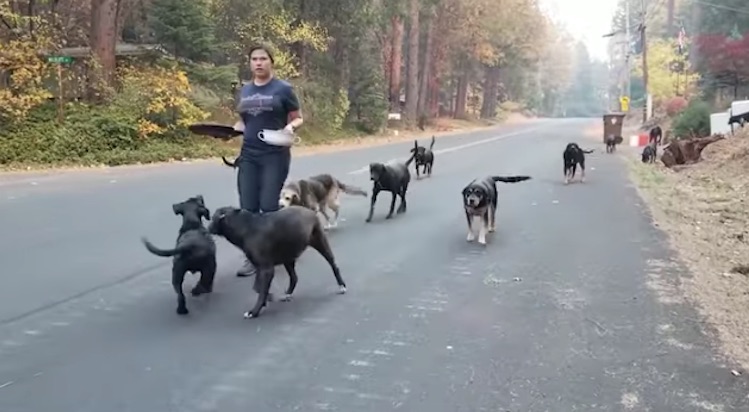 “They all came out with a big puppy smile, happy to see us and wagging their tails,” Sauvageau later told KGW News.

Sauvaugeau had planned to leave on Sunday but stuck around a few more days to help more animals get to safety.

“I was tipped off by my friend Shaun who is working with PG&E (electrical company in the U.S.) in the area — he is my eyes up there and tells me whenever he or his crew sees animals needing rescuing,” he told the DailyMail UK.

Video he shot of a pack of dogs following rescuers onto the street has since gone viral.

In all, he helped rescue 17 dogs, 12 cats, 6 goats and a “donkey named Waffles” Sauvageau said in the video.

Many of the animal rescue agencies have been flooded with animals to care for since the fires broke out. Allison Cardona, a deputy director of operations for Los Angeles County Animal Care & Control, told KGW News that they are caring for about 700 animals, 550 of which are horses.

She estimates that at least 10,000 more pets have been displaced from the wildfires that have devastated the region.

Locals in the area have been aiding rescue agencies with searching and saving animals caught up in the deadly blaze. For example, a horse caught in a pool cover survived the blaze only to be stuck in the pool. She was successfully freed.

Sauvageau is just one of many Good Samaritans lending a hand. He said seeing so many in need of help made him want to act.

“I love animals, but more I hate the feeling of hopelessness and helplessness. It’s the worst feeling,” he said. “Those people down there feel helpless and I want to help pull out as many (animals to safety) as I can.”

Here is more footage from Sauvageau of the animals he helped rescue.

If you have trouble viewing the video above, try the one below.

Homeless Dog Uses Her Street Smarts to Avoid Getting Rescued