A male dog was signed over to a kill shelter only had a few hours left to live because his owner claimed that he is gay.

The former owner said his dog was seen “hunched over” another male dog.

Due to the dog’s mounting behavior, the man discarded the dog at Jackson Rabies Control because he refused to have a “gay dog”.

Humping behavior is typically a sign of dominance in dogs, and unfortunately due to the ignorance of the dog’s former owner, the Pit Bull / Bulldog mix had only a few hours left to live.

Rescuers scrambled to find someone to save the the dog before the time when the dog was scheduled to be euthanized.

Facebook user Jackson TN Euthanasia commented, “Even if that weren’t the most assinine thing I’ve ever heard, its still discrimination! Don’t let this gorgeous dog die bc his owner is ignorant of normal dog behavior!”

This rescue was particularly difficult because this shelter does NOT hold dogs or help organize transport. Adoption is on a first come basis. So in order to pull him, it had to be someone local in the area willing to go to the shelter in person. 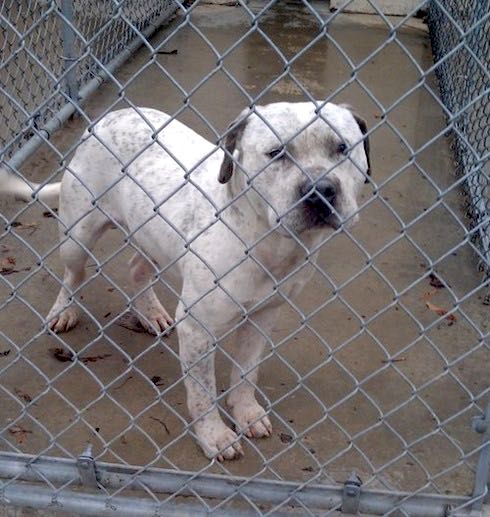 Luckily, the dog was saved just in time.

The dog has been named Elton and taken by Stephanie Fryns, a veterinary tech from Jackson.

Stephanie was waiting at the shelter first thing in the morning for them to open, so she could adopt him. Stephanie owns 4 other dogs.

Elton weighs around 50 pounds and “was pretty friendly so far. He’s pretty scared of everything, which is understandable. But he loved the car ride.”

Stephanie said, “I am going to foster him and have him neutered and vetted, then place him in a forever home that meets all rescue requirements for him.”