The moment a stray dog met German flight attendant Olivia Sievers he was instantly smitten and knew she was the one for him. Six months ago, Olivia met the dog, now named Rubio, while walking in Buenos Aires. She showed the street dog some kindness and from that moment on, Rubio began a campaign to become her dog. He followed her back to her hotel and waited outside for her every night. 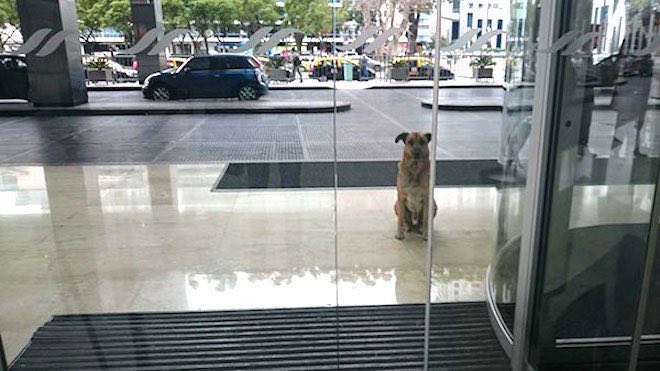 “I met him in January or February this year when I was in Buenos Aires. I was walking around very early in the morning, we played and I had some dog food,” she told Noticiero Trece. He was “really happy that someone gave him attention.”

At first, she tried to prevent Rubio from following after her. “I tried to change my way as I didn’t want him to follow me to the hotel but it was not possible he always followed me so I tried [to wait] one hour but he always watched me and followed me,” she said.

Rubio would lie on the hotel’s mat outside of the entrance until she came out. And so it went. Even when Olivia would depart for home and return a few weeks later, Rubio was always waiting for her. Olivia eventually arranged for him to be re-homed in Buenos Aires but he ran away and returned to the hotel to be with her!

His persistence paid off and Olivia fell in love with him too. She decided to do whatever it took to bring him home to Germany. The local animal rescue, Mascotas Puerto Madero, looked after Rubio while Olivia made arrangements to fly Rubio to Germany.

The day finally arrived to take him home! He had a nice trip and arrived safely in Germany.

Now Rubio is no longer alone.

He has a wonderful home. He’s not only got the human he wanted, he’s also got two doggie siblings to play with.

They are all getting along super well!

What a wonderful love story!

Share Rubio’s fairytale ending with your family and friends!

Dog waits outside hotel until flight attendant adopts him

Flight attendant Olivia Sievers befriended a stray dog in Buenos Aires, Argentina. He would wait outside her hotel every time she returned, until one day she finally adopted him. http://cnn.it/2aQrmWi