Syringomyelia (SM) is a rare disorder that causes a cyst to form in the spinal cord. This cyst, called a syrinx, gets bigger and longer over time, destroying part of the spinal cord.

A tumor, meningitis or physical trauma can also cause SM. Surgery is the main treatment for the disorder.

Here is a list of breeds most commonly affected: 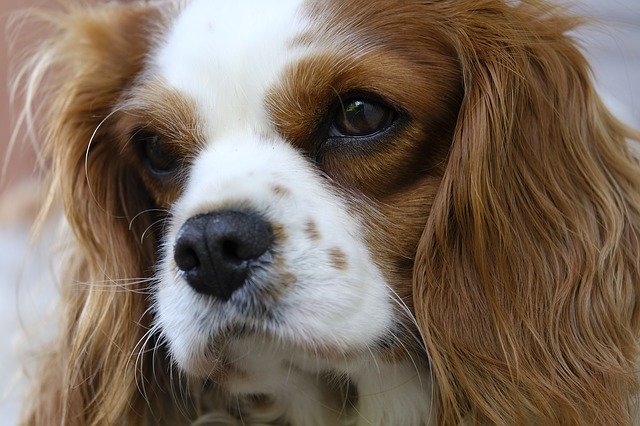 Damage to the spinal cord from the syrinx can cause various combinations of symptoms depending on the size and location of the syrinx:

Genetics of CM/SM: Both CM and SM are inherited disorders, with complex inheritance patterns, which indicates that multiple genes are involved in these diseases.

CM and SM in Humans: Both CM and SM are diseases that affect humans (as well as some feline species, such as the domestic short hair and Persian). SM is a chronic disease in humans, and can be caused by CM, as well as physical damage, such as complication of trauma, meningitis, tumor, arachnoiditis, or a tethered spinal cord.The symptoms of CM and SM in humans include:

Surgery is the only viable treatment for SM in humans, which is aimed at restoring the normal flow of spinal fluid. Not all patients advance to the stage where surgery is needed, while some patients may require repeat surgeries. The most important consideration in deciding to undergo surgery is the severity of symptoms and overall quality of life issues. Evaluation of the condition is often difficult because SM can remain stationary for long periods of time, and in some cases progress rapidly.

Dogs affected by CM/SM do not typically receive veterinary care after owners see signs of these diseases – Rusbridge et al. report an average lapse of 1.6 years between the first signs of disease and a confirmed diagnosis. Because SM is a progressive disease and the variability in disease progression is not yet well understood, a delay in disease treatment can affect the patient’s prognosis and permanent neurological damage can occur. For severely affected dogs, permanent nerve damage can occur in a matter of weeks. If you suspect CM/SM symptoms in your dog, seek veterinary care immediately. Diagnosis of CM or SM can only be done through Magnetic Resonance Imaging (MRI). 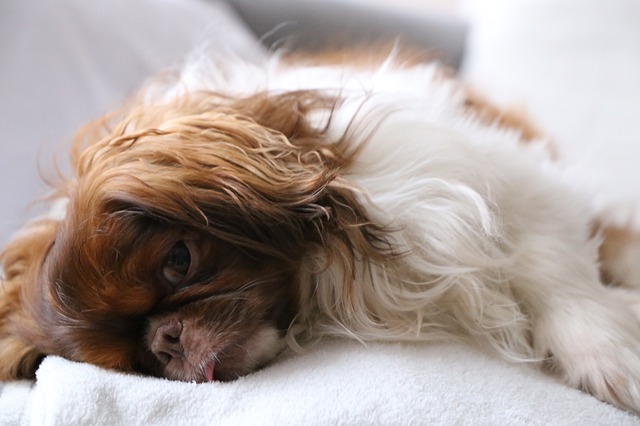 Clinically affected dogs often display signs in response to changes in atmospheric pressure, when excited, at night and when rising in the morning. The following is a list of reported symptoms of canine CM and SM:

Pain: Localized pain in the neck and back are common signs of disease.

Abnormal sensations: Paresthesia is the most common symptom of CM/SM, as the nervous system is directly affected in these disorders.

Humans with CM or SM have described the range of abnormal sensations to include:

Dogs with these types of abnormal sensations display the following types of behaviour:

Head tilting: tilting of the head is also a recognized clinical symptom of CM/SM.

Seizures: Ten percent of humans suffering from CM also report having seizures. Seizure activity is also a symptom of CM/SM in dogs, however, seizures can also be caused by other neurological disorders. Seizures are characterized by rigidity and convulsions. 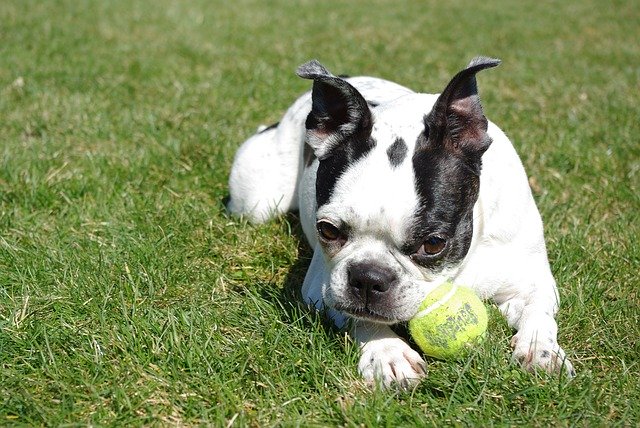 Deafness: In a study performed by Dewey et al., approximately 2% of Cavalier King Charles Spaniel dogs affected by SM also displayed deficiencies in hearing. This is interesting, as hearing loss in humans has also been reported as a symptom of CM.

For all cases in which individuals suffer from a decreased quality of life due to CM and/or SM, the most highly recommended form of treatment is surgery. Surgical intervention will halt the progression of disease, however any existing neurological damage cannot be reversed. Early treatment of SM is extremely important, as permanent neurological damage can occur in a short period of time (weeks) in dogs severely affected by SM.

In addition to surgery, several pharmaceutical products are typically used to treat CM/SM patients. These include anti-inflammatory medications, drugs that reduce Cerebrospinal fluid (CSF) production, and analgesics (pain relievers). The use of drugs to treat canine CM/SM is considered “off-label” use, as clinical trial data required to approve prescription medicines for CM/SM dogs has yet to be gathered. Therefore, the safety and efficacy of the use of drugs to treat CM/SM dogs is not well understood.
Surgical management
The aim of surgery is to restore Cerebrospinal Fluid (CSF) dynamics. The most common procedure for Chiari malformation is suboccipital decompression where part of the occipital bone and sometimes the cranial dorsal laminae of the atlas are removed to decompress the foramen magnum – this surgical procedure is often referred to as Foramen Magnum Decompression Surgery (FMD Surgery). The success reported varies from no improvement to post operative resolution of the syrinx. Syringosubarachnoid shunting is sometimes used and is usually successful at significantly reducing the pain, but some dogs will still show signs of discomfort/scratching. Also, signs may recur in some dogs after several months to years.

Risks: Complications from surgery seem to be rare. There are major blood vessels in the area and if traumatized, there is potential that the dog could quickly bleed to death. Although not actually operating on the brain/spinal cord, it is in close proximity and there is a risk of permanent neurological injury.

Risks: Corticosteroids are strong medicines that mimic hormones. In humans, the use of steroids can lead to weakened bones and eye damage, so short term use is preferred. Most dogs require continuous therapy and may subsequently develop the side effects such as immunosurpression, weight gain, and skin and gait changes. As in humans, prescription of corticosteroids to treat CM/SM canine patients ideally involves the lowest possible dose and alternate day therapy. Additional side effects include:

Non-steroidal anti-inflammatory medicines (NSAIDs): Non-steroidal medicines include carprofen (Rimadyl, Imadyl, and Imafen), meloxicam (Metacam), and Aspirin. These pharmaceuticals may relieve CM/SM symptoms, but they do not inhibit neurological deterioration.

Risks: NSAIDs are commonly used for osteoarthritis and post-surgical pain, and may not be completely effective when used alone, since CM/SM patients face neuropathic pain. Common adverse effects of NSAIDs are gastrointestinal tract disturbances, such as bloody ulcers, and liver or kidney problems. Additional side effects include:

Proton Pump Inhibitors: Omeprazole (Prilosec, Losec, Zegerid) is a proton pump inhibitor. This drug is not recommended as long term therapy longer (greater than 8 weeks), as this may increase the risk of adverse events such as stomach cancer.

Risks: Long-term use of omeprazole is not recommended. In humans, a number of side effects have been reported, including:

Risks: In humans, adverse side effects of carbonic anhydrase inhibitors include:

Diuretics: Diuretic medicines include furosemide (Lasix, Diuride, Frudix, Frusemide) and spironolactone (Aldactone) decrease intracranial pressure by reducing CSF production. In humans, diuretics are used to reduce the swelling and fluid retention caused by various medical problems, including heart or liver disease. They are also used to treat high blood pressure, as they cause the kidneys to get rid of unneeded water and salt from the body into the urine. Consequently, a side effect of diuretic use is frequent urination.

Risks: In humans, the side effects of diuretics include:

Analgesics: Since pain is a hallmark of CM/SM disease, the prescription of pain relievers to manage symptoms is very common. The most widely used analgesic is gabapentin (Neurontin, Gabarone), which is an anticonvulsant approved for use to treat epileptic seizures in humans. As gabapentin is partially metabolized in the liver, periodic blood tests to check canine liver enzymes should be ordered. In addition to gabapentin, pregabalin (Lyrica) is now used to treat CM/SM patients. Pregabalin is reported to be more effective than gabapentin, maintaining pain relief for longer periods of time using lower dosages.

Risks: Sudden stoppage in use of analgesics may induce withdrawal symptoms such as anxiety, difficulty falling asleep or staying asleep, nausea, pain, and sweating. In humans, the following side effects have been reported:

Selecting a few specialized products for your Chiari-affected dog can help them.

Elevated Feeders: Raising the height of water and food bowls reduces strain and pressure on CM/SM dogs with sensitive necks. Try and get a raised feeder that works with your dog’s size.

Collar vs vest harnesses: The choice between using a collar or a vest harness to avoid causing excessive pain to a CM/SM affected dog depends upon the location of the syrinx or syrinxes. Avoiding the use of collars on CM/SM dogs is highly recommended for most patients, UNLESS the location of the syrinx(es) is in the lumbar area of his back. If the syrinx(es) are in the lumbar region of the bag, then traditional dog collars are likely best. The fact that affected dogs tend to hop and scratch while on lead clearly demonstrates that traditional dog collars or harnesses aggravate disease symptoms. There are many vest harnesses to pick from,  but key is to pick one that eliminates pressure on necks and disperses it throughout the shoulders, chest and abdomen.

Ultrasound Therapy: Ultrasound therapy has been most effective in the treatment of painful conditions involving the musculoskeletal and neuromuscular structures. The following results of treatment have been documented in humans:

Therapeutic ultrasound in physical therapy works by alternating compression and rarefaction of sound waves. The maximum energy absorption in soft tissue is 2 to 5 cm, with the intensity decreasing as the waves penetrate deeper. They are absorbed primarily by connective tissue: ligaments, tendons, and fascia (and also by scar tissue).

Risks: Laser therapy is not advised for:

Acupuncture: Acupuncture is an ancient procedure used in traditional Chinese medicine for the treatment of whole-body conditions. Small-gauge needles are applied to various points on the body for the purpose of eliciting physiological responses in the treatment of almost any disease or condition, particularly for relieving pain.

Acupuncture has been successful in treating arthritis in both humans and canines. One study found that acupuncture enhanced the efficacy of antibiotic treatment for canine otitis crises. Favorable acupuncture results have been reported in the treatment of many other canine conditions, including the following: cardiovascular disorders

Risks: Acupuncture may not be effective or should not be used in several situations:

Please note: this DogHeirs article was originally written in 2011. There may be newer diagnosis and treatment options currently available. Please consult with your veterinarian. This article is for information purposes only and is not intended, nor should it be used as a substitute for the professional medical advice of your veterinarian.

For information on recent studies on recognition and signs of Canine Chiari associated pain and other scientific research on this disease you may find the publications by Dr. Clare Rusbridge, Professor of Veterinary Neurology at the UK’s University of Surrey helpful.