When the Scrivener family lost Abbey, their much beloved 14-year-old dog to liver cancer, it affected their 4-year-old Meredith deeply. She approached her parents with pen and paper and said that she wanted to write a letter to God.

With the help of her mother, Joy, Meredith wrote the letter and together they mailed it off at their neighborhood’s post office in Brook Hollow, Texas. The letter was addressed “To: God in Heaven,” and included the family’s return address and some photos of Abbey, so God would recognize her. Meredith added extra stamps to the letter, given the distance it had to go.

Two weeks later the family returned home to find a gold-wrapped package on their front porch. The mysterious package was addressed to Meredith and signed ‘God, and one of his special angels’.

When Meredith opened the package, inside was the Fred Rogers book When a Pet Dies and a response to her letter on pink paper and Abbey’s photos attached.

Here is Meredith’s letter and the reply she received:

Will you please take care of our dog, Abbey? She died yesterday and she is in heaven now. We hope that Abbey is OK now and that she isn’t sick anymore. We love you for letting us have Abbey even though she died. We are sending pictures of Abbey in the little envelopes so that you can see what she looks like and you will know her when you see her.

PS: Mommy wrote it after Mer told her the words.

I know you will be happy to know that Abbey arrived safely and soundly in Heaven. Having the picture you sent was a big help. I recognized Abbey right away.

You know, Mer, she isn’t sick anymore. Her spirit is here with me, just like it stays in your heart – young and running and playing. Abbey loved being your dog, you know. Since we don’t need our bodies in Heaven, I don’t have any pockets, so I am sending your beautiful letter back with the pictures so you will have this little memory book to keep.

Thank you for your beautiful letter. Thank your mother for sending it. What a wonderful mother you have; I picked her just for you.

God, and one of his special angels who wrote this letter after God told her the words.” 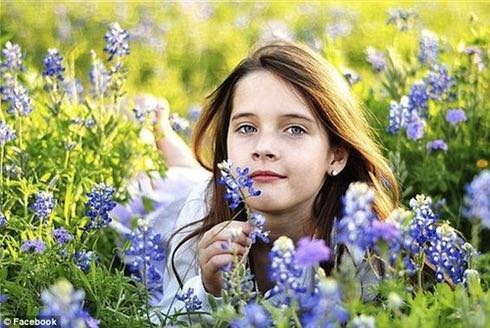 Meredith’s parents were surprised and deeply touched that someone took the care to help ease Meredith’s grief at losing Abbey. Joy originally shared her story with the San Antonio Express-News and later told United Methodist Reporter that Meredith was not at all stunned liker her parents were upon receiving a response to her letter. “When she received the package, she was happy, but she wasn’t surprised,” Joy said. “There was no doubt in Meredith’s mind that her letter was going to heaven.”

Meredith’s letter was written in 2006. Meredith is “doing great” and “still has a big heart for animals” according to her mom. She and her family have two new canine friends in the home with a collie and a terrier.

And Meredith and her angel’s exchange of letters continue to be shared online, touching many with its simple message of kindness and love.

Photographer Captures the Playful Friendship Between Her Daughter and Bulldog

Kids Thought a Homeless Dog was Dead at First, Reach Out to Rescuers for Help