When Penny the Pit Bull was saved, her rescuers had no idea that they were actually saving two lives.

Penny was thrown from a moving car and rescued by staff at the Berclair Animal Hospital nearby. Penny was emaciated, injured and suffering from congestive heart failure as result of heartworms. Penny had infected cuts and wounds all over her face and her rescuers say that they believe she was most likely used in dog fighting. 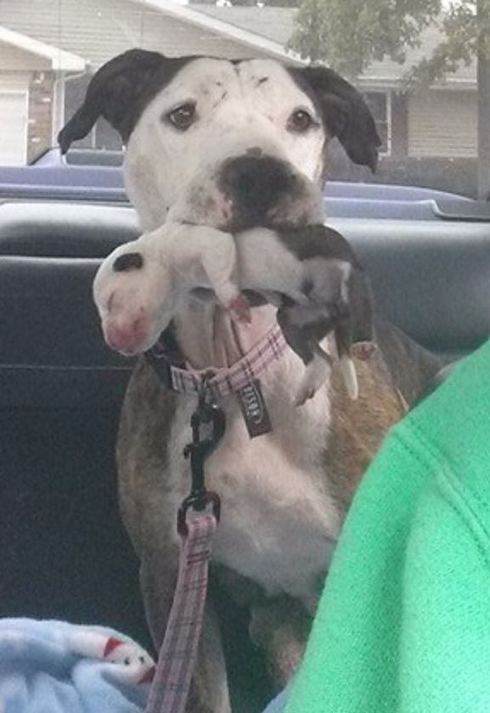 The vets called Donna Velez, founder of Hearts of Gold Pit Rescue in Memphis, Tennessee, to see if her rescue could help. Although her rescue was full and she was recuperating from her own health issues, Donna asked them to send her some photos. As soon as she saw Penny’s pictures, she instructed the vets to get the dog out of pain and treat her. Donna told DogHeirs that even if she couldn’t take Penny herself, she was determined to figure something out to help Penny. 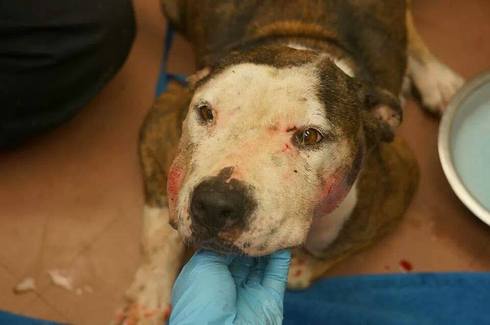 Soon after, Donna drove to the clinic to see Penny herself. Taking one look at the skinny, hurt dog, Donna knew she would take her. She thought “I can’t not take her”. “She looked so pitiful,” Donna told DogHeirs, admitting, “Once I see them, I’m a goner.”

Donna began networking for Penny and as luck would have it, a family in St. Louis saw Penny’s photo and wanted to adopt her right away. The family already has two Pit Bulls and a wealth of dog knowledge. 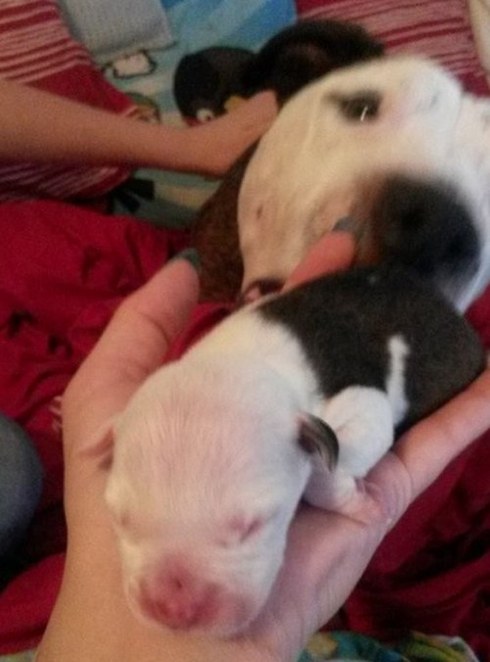 “She’s only been with us 10 days and she has a long way to go, but she is a good dog despite all of her antics, she just isn’t used to this lifestyle because she was mistreated for so long,” wrote Jennifer on her Facebook page. “She has already come a long way since we got her.”

Penny’s health has made a remarkable turnaround in just a few weeks. Her treatment for her advanced heartworm is working successfully and she’s learning many new things at her new home.

“Penny is really loving life now! Her appetite is HUGE which is good because she didn’t want to eat the first day home so hopefully she will start packing on some pounds. She’s still afraid of our two boys but I’m working on socializing them safely. She loves going on walks and wants to run back to the house when we return, but I have to keep her from doing that due to her health. Overall this is a big adjustment for everyone but I look at it like having a new baby, lots of changes that eventually fall into place.” 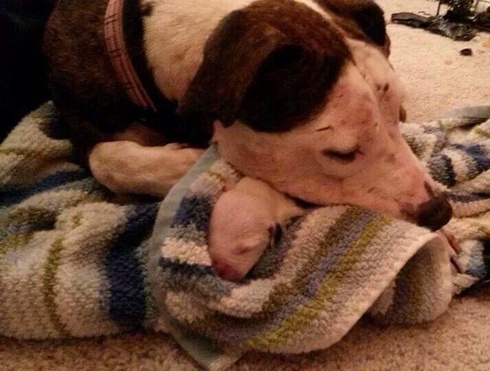 The biggest surprise in Penny’s recovery, however, came this week when she unexpectedly gave birth to a puppy. The baby girl has been named Nickel. Amazingly, despite the traumas and medications Penny has undergone, Nickel is perfectly healthy!

Penny is nursing Nickel and when the puppy is ready to be weaned she will go to a foster family with Hearts of Gold Pit Rescue. Donna told DogHeirs that baby Nickel may already have someone interested in adopting her. 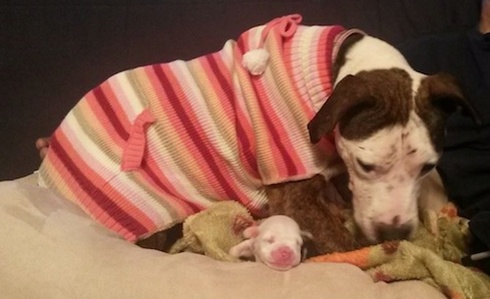 Penny’s new family sums up Penny’s change of situation and rescue well: “Just imagine the life this pup would have had if the owners didn’t dump Penny. 2 lives saved!”
To find out more about the dogs available for adoption at Hearts of Gold Pit Rescue visit their website. 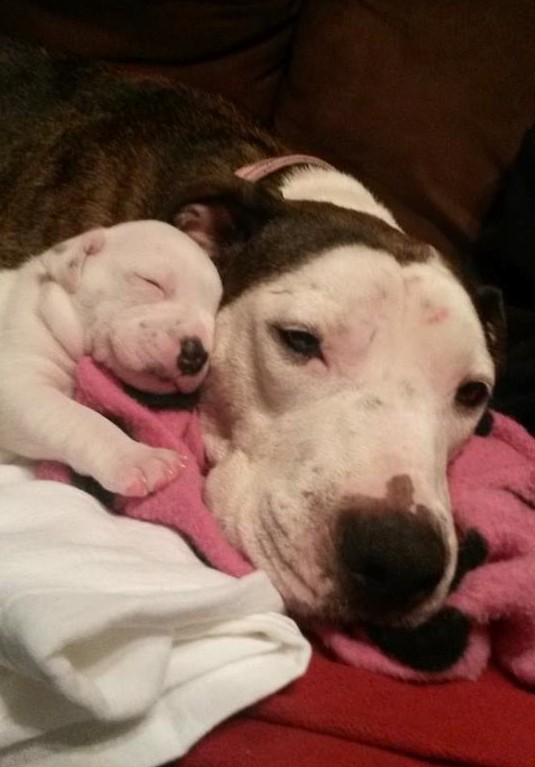 Jennifer wrote on Penny’s Facebook page, “I miss Penny so much….she peed on my rug, ate my favorite hello kitty slippers, chewed up the door frames and destroyed her kennel. But I never punished her. I did what I said I was going to do the day I saw her story on my facebook newsfeed. I said, I want that dog so she can feel the love I give to our boys and have a spoiled life as she deserves, and that I did. I just wanted to spoil her for years, not months. I cant quit the tears…she was a good dog. So calm and eager to cuddle and a great mommy to nickel. I loved her so much and I am glad I have Nickel to carry her on…RIP my sweet Penny”

Nickel is now 10-weeks old and is getting a lot of love at home. 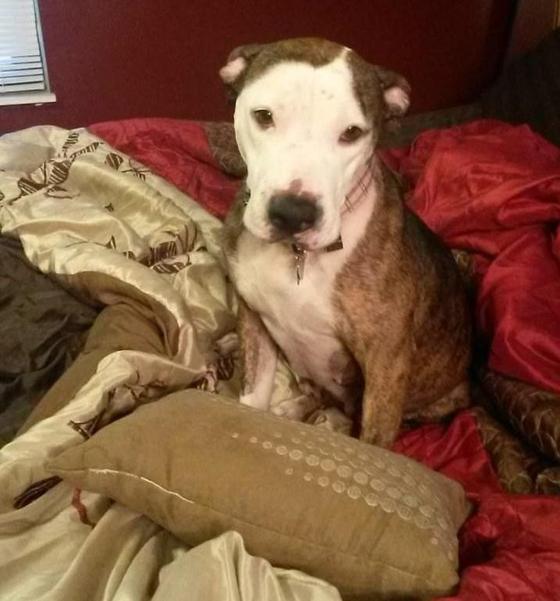 Jennifer sent DogHeirs a picture of Nickel all grown up! “She is quite the character!” says Jen. Isn’t she adorable? 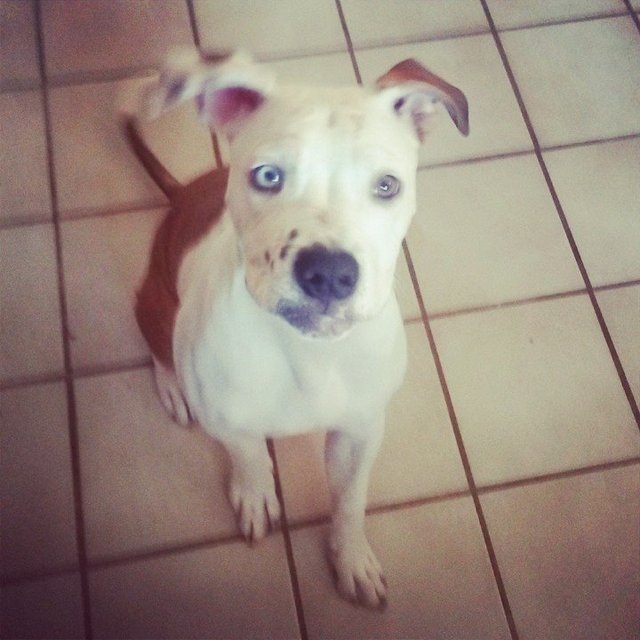 Pit Bull Snarls At Her Rescuer, But Her Eyes Reveal The Pain She Is In