“In 2006, six months after we had adopted Chica, our 8 year old Border Terrier mix lady, my husband and I decided to try our hand at fostering. We wanted to give another old senior dog a second chance and with Chica being such a delightful terror terrier lady, we thought it would be good to have a temporary companion for her. 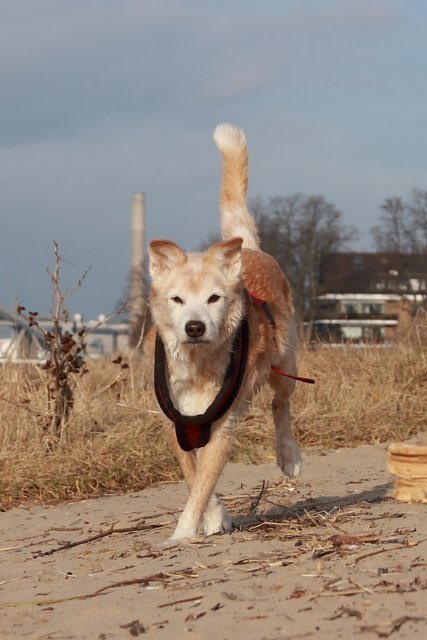 “We contacted the rescue organization that had rescued Chica and we were informed the dog that really needed to get out of the shelter was Cenour, a probably 5-8 years old Podengo Portugues, which had been rescued out of a perrera (high kill shelter) and taken in at the rescue shelter. Unfortunately, his former life had left him limping and terribly afraid. He had given up, he just wanted to be left alone and barked at everything and everyone.

“Here is the video that we saw and we knew, we had to get him out of there.

“So our first fostering effort (and failure) began …

“When we picked him up, a very slim, sandy-coloured, flea-bitten wolf limped out of the transport box. He was on the brink of emaciation, stank to high heaven and additionally to all that, he had a tumor under his belly and he shook his head repeatedly. At home he just stood there, most of the time in a corner, staring off into space.

“We wanted to give him a few days to adjust from life in hot Spain to the more moderate climate of Germany before dragging him off to the vet, but while on a short walk he snagged his tumor on a twig and he needed to go to the vet right on day one.

“Luckily the tumor turned out to be an infected nipple. Unfortunately, our vet found out the reason why he shook his head all the time. He had a heavy inner ear infection in both ears and for the next quarter year, Cenour had to have his ears rinsed out EVERY DAY. Both his ear drums were non-existent and when the ears were free of pus at last, we found out that all the bones in his inner ear had been heavily damaged by all the pus. The auditory ossicles were gone.

“Additionally to the inner ear infection, the infected nipple, we also found out that his right front leg had been shattered and had fused into a wrong position. He had early spondylosis in his sacral bone, and his skull, his rips, almost every bone in his body showed signs of abuse, the x rays showed breaks that had badly fused again on almost every bone. His life in Spain had been one of pain and abuse. 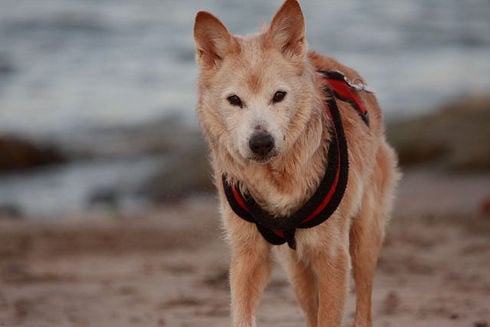 “Slowly, his health recovered, he was still a limping, deaf wolf, but from time to time when he wasn’t staring against the walls, he started to take interest in us. He started to acknowledge and accept us. Three months after taking him in, he came up to me for the first time and he wanted me to pet his snout. He turned into a cuddle bug from there on. I started to work with him, painfully slowly I taught him hand signs for stop, down and come. Due to former abuse, he was not the lightest bulb in the lamp shop, but he learnt and he was ready to go to a forever home.

“However, a senior dog – deaf, semi-autistic with a heavy limp? Not a chance. So after a couple of more months, we decided to become a glorious foster failure. We couldn’t part with Cenour anymore who came out of his shell with every new day. From the limping, flea-bitten wolf he turned into a proud, silly, wise prince who gave love and received love in abundance.

“He discovered water in all its forms, loved his water physiotherapy and our outings at the River Rhine, he loved to swim, loved to goof off in the snow, loved to lick the raindrops from his snout. He was a huge cuddle bug, and getting massages was his version of heaven. He became the epitome of a wellness dog. 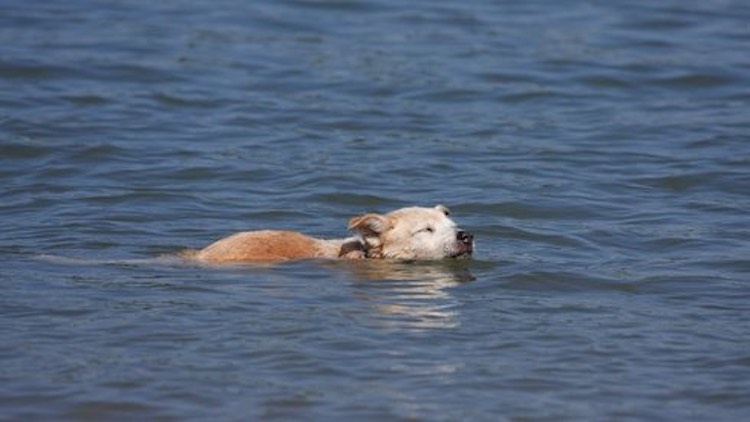 “He was a clown, a wise oldie and the most beautiful soul on four paws. He was our prince, our baby-bear, our soul dog. His right front leg became his lucky paw.

“Late in 2009, his spondylosis became so severe, that he could not walk with his hind legs anymore and while we fitted him wheels, his health deteriorated further and so in June 2010 we had to finally say goodbye to our baby bear after four wonderful years with him. Our vet told us that he was much older than the approximately 5 to 8 years first estimated by the rescue organisation, our vet estimated he was between 13 to 15 years when we let him go.

“Even now, I miss him like crazy. And even though we have another senior Podengo Portugues now, he is still very much in our hearts and minds. Cenour taught me humbleness and to never give up. He taught me that a disabled dog is still a dog with his instincts, his zest for life and love.

“Cenour’s life with us (in German with English description under the vid on youtube).”

Mailman Delivering Package Waits At Door to Give Dogs Cuddles

Cyclists Save Dog Tied Tightly to Tree and Left to Die