Bebé, Nick, Niña and Tico — four dogs who are looked after by a homeless man in Brazil — stood waiting patiently at the entrance of a hospital after he was rushed there to for treatment.

A photo of the loyal dogs at the hospital went viral on social media, prompting news media to find out the full story. 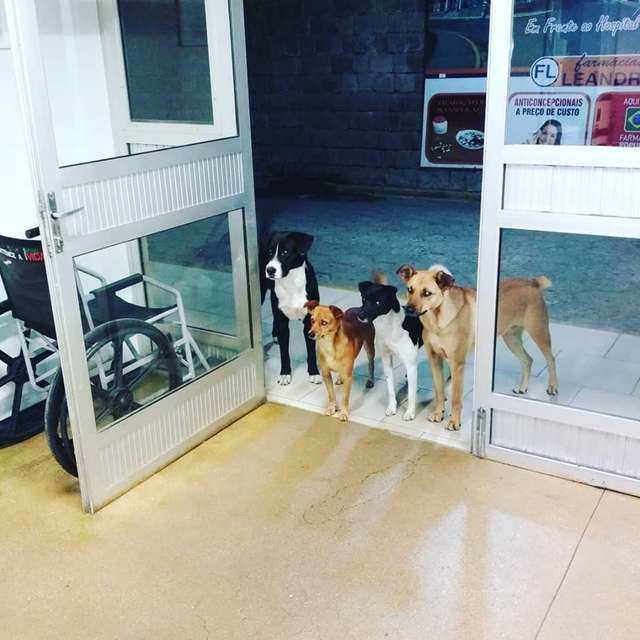 The homeless man, Cézar Gonçalves, arrived at the Alto Vale Regional Hospital in Rio Do Sul, Brazil, at 3am in the morning on December 9, 2018, according to Brazilian news outlets. He went to receive treatment and medication for a health problem, according to the digital website Notas de Mascotas.

The dogs were later let inside the hospital to see Gonçalves, who said he gives his dogs food over himself to ensure they don’t go hungry.

He told the publication that he will stop eating to feed them if he does not have enough food. Many dog lovers pointed out that seeing the four dogs so concerned for his well being shows just how well cared for and loved they are.

Gonçalves, who recycles materials he collects for money only stayed at the hospital for an hour. It was the hospital  who snapped the photo and it was shared on Facebook, where it quickly spread, according to El Espectador.

Gonçalves adopted the first dog off the streets five years ago and the other three dogs soon joined them. He wakes every morning at 4am to collect recycling and the four dogs always go with him.

For him, his dogs are his family. “Without the animals, I am nothing,” he said.

Note: the following video newscast is in Portuguese.

Dog Patiently Waits for Beloved Toy to be Repaired