Buzu was living his life on the streets of Romania trying to get someone to notice him. Someone had taken pity on him and set up a cardboard dog house with a cushion inside. When Howl of A Dog spotted him, they noticed that he would follow after people, trying to get their attention.

Howl Of A Dog

“Buzu spent his days sleeping in his little ‘shelter’ or wandering around the streets longing for attention and food scraps. We asked passers-by and people in that neighborhood, trying to get more details about Buzu and if he had an owner. All we managed to find out was that he was a stray dog and had been living in that area for more than a year.”

Life on the streets is tough and when rescuers returned to help him they noticed that someone had taken the cushion from Buzu’s cardboard dog house. 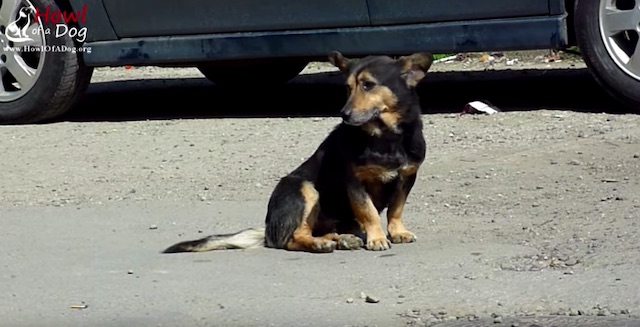 Howl Of A Dog

“After so much time on the streets he seemed in a way resigned to his fate, to his life of unending loneliness,” they observed. They took him back to their shelter where they tended to his fleas and patched fur. He had skin issues and an ear infection from being left to fend for himself for so long. “His teeth were extremely torn, due to improper food, such as bones that he most likely ate when he was homeless,” they said.

But after a year in their care, Buzu’s life of loneliness was about to disappear. A wonderful family in the UK decided to adopt him and he joined Emma and her other dog in their home, where he is spoiled with love and attention.