A rescued dog who lost her puppies is finding comfort in her stuffed animals to help her through her loss.

Kiah the dog was found by the Cherokee County Humane Society in Atlanta, Georgia after she was found wandering the streets and pregnant.

Examination revealed the Pit Bull had a troubled past. 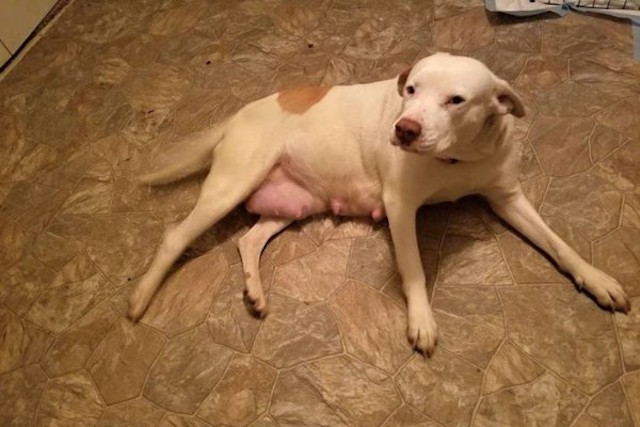 “Her x-ray showed old pellets near her spine, which tells us she was shot once upon a time,” Caroline Claffey, the woman who is fostering Kiah, wrote on Facebook. “Her front teeth have been filed down, which speaks of bad intentions at the very least.”

Sadly, rescuers learned her puppies had been dead for several days and she needed emergency surgery to save her life. Kiah lost her puppies because of overbreeding. 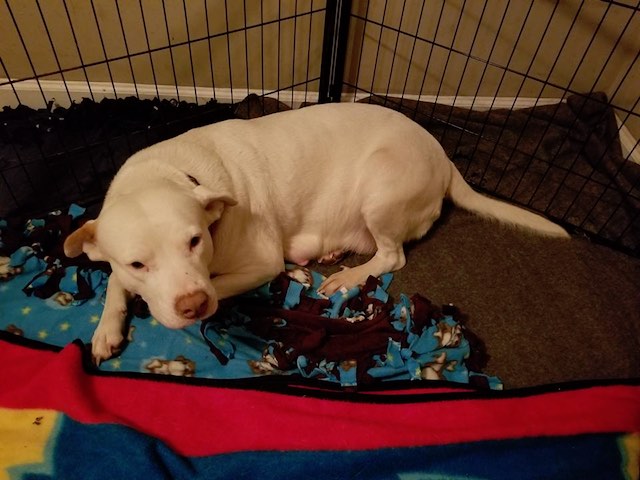 “She was severely overbred, Caroline added. “Her most recent pregnancy was too much for her, and all her puppies died. She needed an emergency c-section to remove them, and thankfully she survived.”

They named her Kiah, which means “new beginnings” and Caroline brought her home after her operation for her recovery.

“She’s had a tragic life,” said Caroline. “I’m really bummed that her new start had to have such a tragic beginning.” But Caroline is doing their best to lift the dog’s spirits. 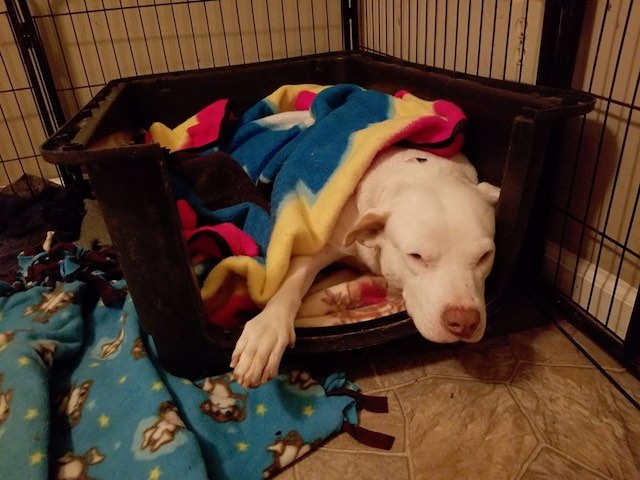 She filled Kiah’s bed with stuffed toys to help her feel better. “Kiah is still devastated over the loss of her puppies,” Caroline described. “She has some stuffed animals to cuddle with that make her feel a little better, but her spirits are still low.”

“She has one that vibrates and plays lullabies, and that one is her favorite. She likes the music.”

Caroline shared a video of Kiah taking comfort with her stuffed toys.

Sadly, Kiah could not become a surrogate mom for any orphaned puppies (as is hoped in cases such as Kiah’s) either because her mastitis.

“Kiah is unable to nurse – most of her nipples are useless [from overbreeding] and the rest of them are still infected,” explained Caroline. “They’re getting better but as they do, her milk dries up.”

When she recovers her strength, Kiah will be treated for heartworm.

“I’ll be fostering her until she’s healed, happy, and fully vaccinated,” Caroline wrote. “Then I’ll start taking her to adoption events to find her new forever home. Obviously she has a home with me for however long that takes.”

It didn’t take long for Kiah’s spirits to rise under Caroline’s care. She shared a video of Kiah doing a “happy dance.” When asked by someone on YouTube how Kiah is doing, she shared some wonderful news. “She got adopted last year! She’s doing wonderfully.”

You can help Cherokee County Humane Society by visiting the CCHS website.

Stolen St. Bernard Barks for Days From Abandoned House Until Someone Finally Comes