A Texas animal shelter has sparked outrage after a dedicated volunteer posted to social media about a dog who she says was euthanized while in labor.

Dacia Anderson volunteers at both the Amarillo-Panhandle Humane Society and Amarillo Animal Management and Welfare. But what she saw on May 10, 2018, left her disgusted and horrified.

Dacia saw a dog (labelled G7) had given birth to a puppy at the animal shelter. The dog had been surrendered the night before, and she alerted staff members to get the dog a whelping box and thought the dog and puppies would be cared for. But when she returned later in the day she says that she was met with resistance and learned G7 had been put down.

“She had been euthanized while in labor. Not before, not after, but during,” she said. 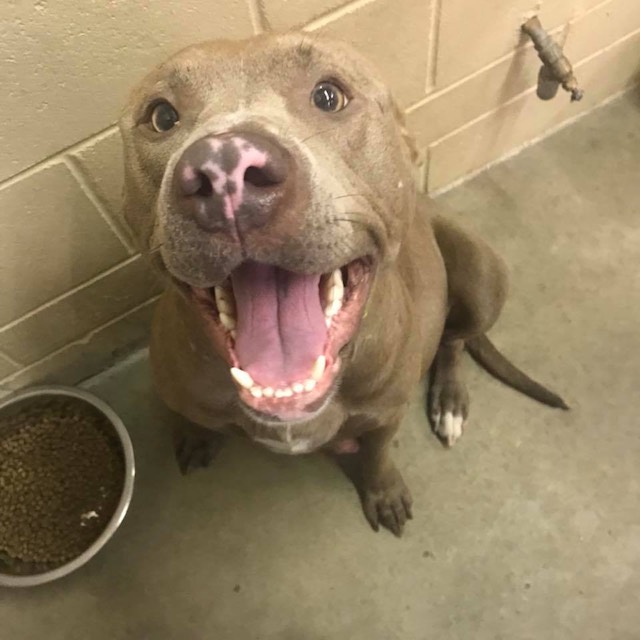 Dacia tried to express her concerns with management and city officials, but later decided to post her concerns on Facebook, News Channel 10 reported.

The post quickly went viral and the animal shelter staff have received threats. However, Director Richard Havens told the news station that the dog in question was deemed aggressive and was euthanized for public safety.

“The owner’s of the dog in question called us at night and called 911 in distress because they were afraid of their own dog,” said Havens. “The dog was becoming aggressive to them and their other animals.”

“The following morning we ended up euthanizing the dog because of the risk of public safety,” said Havens. “The dog was aggressive. The owners did not want the dog. They did sign legal custody over to the City of Amarillo and then we processed the dog out the follow morning.”

Havens confirmed the dog was in labor at the time she was euthanized, but argues that it was the most humane choice given the dog was not a candidate for foster or adoption and a matter of public safety.

Dacia disagrees, however, saying the dog was not aggressive and that she had been kept in with the general population with no note indicating that she was a risk.

She also added that although the community can be blamed for such problems, animal shelters have “an obligation to do what’s right for the animal in the most humane way possible” and she argues that what she saw that day was not humane.

“Please let me be VERY clear. The Amarillo-Panhandle Humane Society is a separate entity. They handle adoptions and rescue. They do NOT handle intake or euthanasia. Let me also be clear, I do not wish harm toward anyone at Animal Management and Welfare. I have had the privilege to know some amazing people that pour their heart and souls into those animals and want nothing more than to see them walk out the front door.

“I need to write about something that I recently witnessed and found completely appalling and unacceptable. I have found immense joy through my volunteering, and I have struggled with the potential pushback from speaking out. I have also sought to remedy wrongs through the proper channels. I have held on to this post, hoping that I would not have to share, but I cannot seem to get anywhere. Today, I am coming to the public for support.

“On Thursday, May 10th, while helping an Amarillo-Panhandle Humane Society employee complete a walk through of the facility, I came across an obviously pregnant pit bull in G7. I went into her kennel to take a picture for the APHS Facebook “In the Facility” album. She was friendly, but scared, and jumped up on me for comfort. I looked at her band and noted she had been an owner surrender the previous day.

“Later, while running dogs back and forth to and from kennels for evaluations, I noticed that G7 was in labor and had given birth to a single puppy. She had no whelping box and was laying on the concrete. I immediately went to Amarillo Management and Welfare’s main office area to alert someone. I spoke with a gentleman who directed me to tell Mr. Havens (AMW director). Mr. Havens told me to find Christy (the assistant director). I happened to pass another AMW employee on the way and asked if they had seen Christy, as G7 was in labor with no whelping box. They acknowledged and took control of the situation. I then saw an AMW kennel attendant assembling a whelping box and assumed it was being handled.

“Unfortunately (and to my surprise), I was met with resistance from an AMW employee when I attempted to enter G building a bit later while looking for a new volunteer. I was told to give them a minute. I could see the AMW staff vet, a few other kennel attendants, and a large, portable metal cage in the building. I immediately knew they were gathering mama from G7. I happened to pass another AMW employee and asked if she was being euthanized. He said that they were probably just moving her to somewhere more quiet, and less stressful.”

“A bit later, I heard that a message had been sent stating G7 was euthanized. She was in labor, and euthanized. An AMW employee later confirmed that it was indeed the same dog. Her last moments, while she lay dying, were spent still trying to clean her newly birthed puppies. Their words, not mine.

“I am aware that euthanasia is a reality at the shelter. I am well aware of the overpopulation problems. I am also well aware that AMW has to make hard decisions. However, I feel that this action is the exact opposite of a what “the most humane community in the Panhandle of Texas” would do. This act was horrific to say the least. If this is acceptable to the leadership of the shelter, then what is out of bounds?

“I have felt uneasy with the spay aborts on dogs that were obviously late term. Tater Tot (a pit bull mix from C1) was given a spay abort on April 20th even though she had been given food and treats less than an hour before she was taken back for surgery. AMW was made aware of this fact. She could have aspirated and died, but evidently this wasn’t a concern. Sally (a pit bull from F11) was spayed while heavily pregnant on Thursday, April 26th, and then brought to PetSmart on Saturday (her foster was unable to care for her), suffering from severe mastitis. This was heart wrenching to see. She was absolutely miserable.

“I also cannot understand why certain dogs are treated for ringworm and their story advertised on the media, while others are quietly euthanized. All of these things scream to a complete lack of compassion. You cannot present yourself one way, and then act like a monster behind closed doors.

“The shelter already lacks public support, which is so crucial not only for the new breeding ordinances, but the overall agenda. The fact that the Target Zero report was just released makes me even more disgusted that this occurred. Amarillo couldn’t euthanize its way out of our problems in the past, and it won’t work now.”

“If you agree that this is NOT acceptable, then please take a stand. What happened to G7 should never be allowed to happen again. The shelter needs to be transparent. They need to gain trust within the community. We need change. The shelter needs a larger budget and to slow down intake. Other cities have accomplished this. And they did it with community support!”

Please let me be VERY clear. The Amarillo-Panhandle Humane Society is a separate entity. They handle adoptions and…

Dacia also called out officials in her post, prompting local animal advocates to let their voices be heard. She also told News Channel 10 that she has since been asked to take a step back from her volunteer work for now.

Goofy Rescued Pit Bull Talks With Her Mom All the Time

46 Dogs Terrified of Humans are Rescued from Deplorable Conditions