Lyme disease is one of the most common tick-transmitted diseases in the world and it affects dogs just as much as it does humans.

Lyme disease is caused by a bacterium (borrelia burgdorferi) that is commonly transmitted to animal hosts by ticks.

Basically, a tick bites an infected deer or rodent and then passes Lyme disease along to dogs and people by attaching itself to the skin for a blood meal.

Not all ticks are infected and carry the disease. But your dog is at higher risk for getting Lyme disease if he/she lives in an area with a high incidence of human Lyme disease. Whenever and wherever there is a wildlife area where rodents and deer live, there are ticks around. 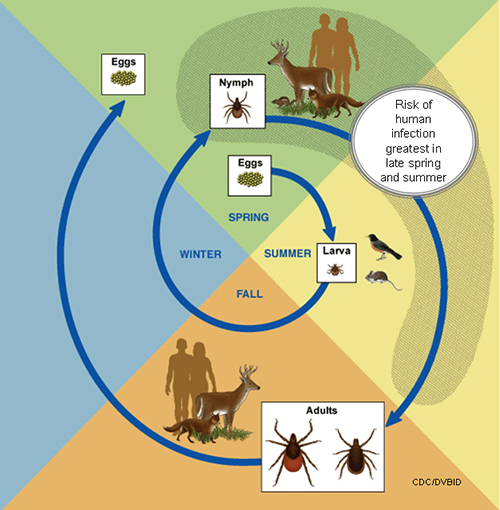 The sooner a tick is removed the lesser the risk of a dog getting infected by Lyme disease, although the risk is never removed completely. Generally, removing an embedded adult tick within 24 hours will help prevent transmission of the disease. However, larval tick nymphs may transmit the bacteria faster than adult ticks.

The disease becomes more difficult to treat as the time between diagnosis and treatment increases.

Transmission of the disease has been reported in dogs throughout the world. In the United States, lyme disease is most prevalent in the upper Midwestern states, the Atlantic seaboard, and the Pacific coastal states.

Pennsylvania had the highest reported number of confirmed cases of Lyme Disease in humans in 2016 followed by New York, New Jersey, Massachusetts, Connecticut, Maine, Maryland, Minnesota, and Wisconsin according to CDC statistics. 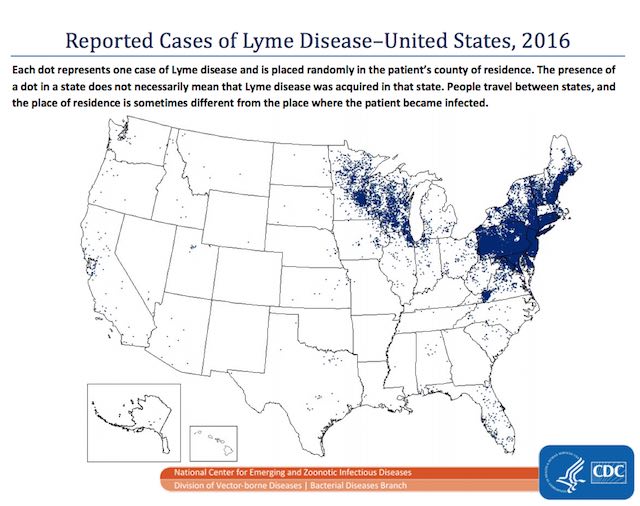 Global warming trends also mean tick populations worldwide are higher than in previous years, and therefore put dogs and people at greater risk of catching the disease. Also, the more urban areas encroach wilderness areas, the higher likelihood ticks will be encountered. In areas that have cold winters, ticks will be present during the warm months (spring and summer). In areas that are warm throughout the year, ticks will present year round.

An infected dog may display a range of symptoms. The telltale bullseye rash at the infected site that is common in humans is not present in dogs. Many dogs with Lyme disease may show few if any signs. Some of the more common symptoms can include any of the following:

Other symptoms associated with Lyme disease may include:

Later, rarer, symptoms and complications can include:

The dominant clinical sign of the disease in dogs is recurrent lameness of the limbs due to inflammation of the joints. Some dogs may develop acute lameness, which lasts for only three to four days but recurs days to weeks later, with lameness in the same leg, or in other legs. This is better known as “shifting-leg lameness”. 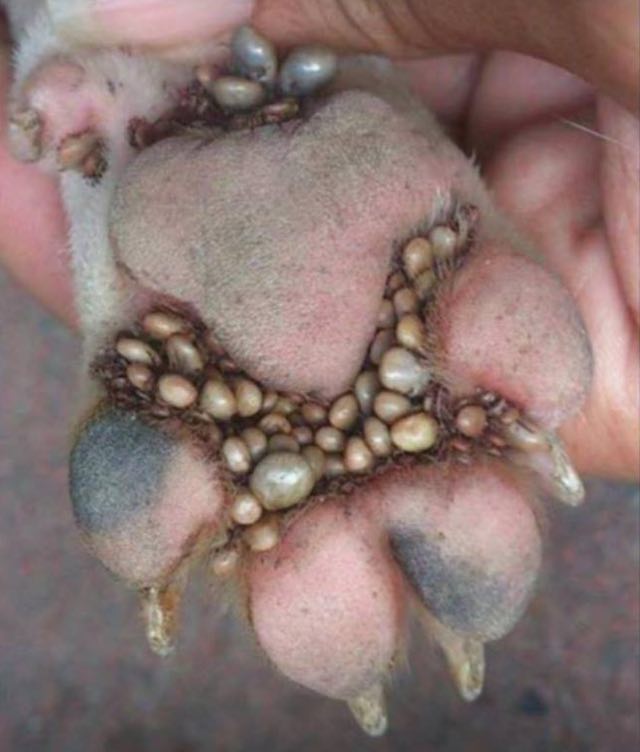 This condition is characterized by lameness in one leg, with a return to normal function, and another leg is then involved. Also one or more joints may be swollen and warm. Dogs will react in pain if the joint is touched.

More serious complications include damage to the kidney, and rarely heart or nervous system disease. Kidney problems appear in some dogs, and seem to be more prevalent in Labrador Retrievers, Golden Retrievers, and Bernese Mountain dogs.

If kidney issues are left untreated, it may lead to glomerulonephritis, which causes inflammation and accompanying dysfunction of the kidney’s glomeruli, which filter blood. Eventually, total kidney failure sets in and the dog begins to exhibit such signs as vomiting, diarrhea, lack of appetite, weight loss, increased urination and thirst, fluid buildup in the abdomen and fluid buildup in the tissues, especially the legs and under the skin.

Once the diagnosis is established, antibiotic treatment is usually very effective. The earlier the disease is treated, the better the odds are for antibiotics to work and the dog to fight off the infection.

A veterinarian will do a complete blood profile on a dog, including a chemical blood profile, a complete blood count, and a urinalysis. They will use these tests to look for the presence of bacteria, parasites, and fungi in the bloodstream. Fluid from the affected joints may also be drawn for analysis.

The condition of the skin near the tick-bite site will be an important indicator of a dog’s health. They will check whether the wound is still open, or whether there are any fragments of the tick’s body left in the wound.

A veterinarian will focus on differentiating arthritis initiated by Lyme disease from other inflammatory arthritic disorders. X-rays of the painful joints allows a doctor to examine the bones for damage or disorder.

If the diagnosis is Lyme disease, a dog will be treated with antibiotics such as doxycycline. The majority of dogs can be treated at home, unless their condition is severe. A dog with Lyme disease should be kept warm and dry, and his/her activity limited until the clinical signs have improved. The recommended period for treatment is four weeks.

Improvement in sudden (acute) inflammation of the joints caused by Borrelia should be seen within three to five days of antibiotic treatment. If there is no improvement within three to five days, your veterinarian will want to consider a different diagnosis. Pain medications should not be used, unless they have been recommended by your veterinarian.

Unfortunately, symptoms of Lyme disease do not always completely go away in some animals. Long-term joint pain may continue even after the bacteria has been fully eradicated from a dog’s system.

Canine Lyme disease is largely preventable by using tick control, tick checks and through vaccination. Talk to your veterinarian about your dog’s risk factors before deciding on the best preventative measure.

Firstly, find out whether or not ticks are prevalent in your community. If you live in an area where ticks are present in high numbers, take the proper precautions. 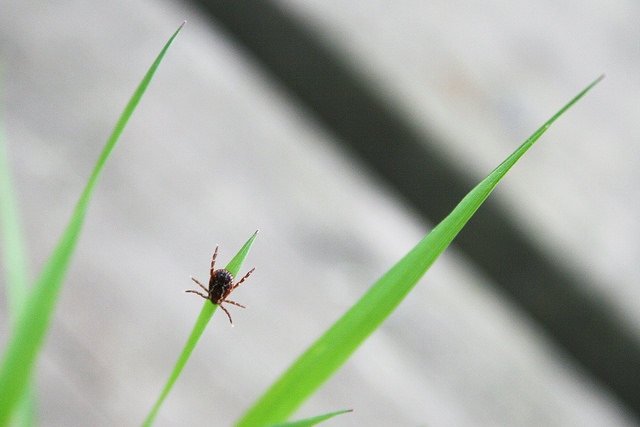 Also note if local health officials have issued any warnings in your area.

There are a variety of risk factors to consider such as:

Avoid areas where ticks are most abundant, including wooded areas, underbrush, tall grass, bushes, and leaf litter. Be sure to clear dead or rotting vegetation away from your home and rake up fallen leaves, twigs and branches.

Ticks can also be in grass and gardens. Many pets get ticks in their own yards! They tend to be more prevalent in rural and wilderness areas or in suburban areas with wilderness areas nearby.

Be sure to inspect your dog each time you go on a walk in nature, or if you live in a wooded area, especially in the spring and summer, when ticks are more prevalent.

An easy way to spot ticks on dog’s coat is to go through your dog’s coat with an air blower (hair dryer). Otherwise brushing the fur or running your hands through his/her coat is a good inspection method too. Especially check under your dog’s ears, head, neck underbelly and feet. 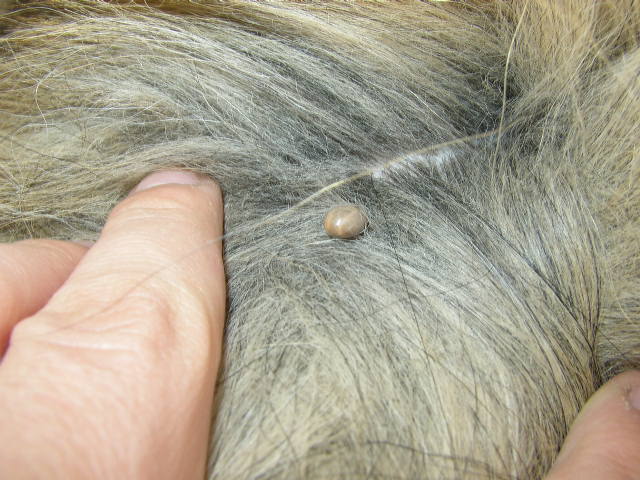 Also regularly check your dog’s clothing (such as harnesses or coats) and bedding or sleep area as well. If your dog is continually itching one area, check it to see if there is a tick there.

Don’t forget to check yourself after a walk outside too. Ticks can be in your clothing or shoes and jump from you to your dog. As Lyme disease is a zoonic disease, you can catch it from a tick bite too.

It also helps to know what a tick looks like. Some are very tiny and difficult to see. Refer to our Identifying Ticks article to learn what different ticks look like and where they live.

As mentioned, vaccinations are available in areas with severe infestation and upon recommendation of a veterinarian.

For the average pet, a good quality spot-on flea/tick product will help prevent most tick-borne disease by preventing ticks from latching on and feeding long-term.

Just as with flea treatments, spot-on topical products and collars are pesticides that make your dog’s blood distasteful to a tick. There are also topical tick lotions that can be used.

Insect repellents with DEET are effective for people but not a good choice for your pet, as they may ingest the spray when grooming his/her coat and DEET is toxic.

What to do if you find a tick on your dog?

If you find a tick, you need to safely remove it. Removing a tick from a dog can be tricky, especially if the tick has burrowed into the skin. Read our article: How To Remove Ticks Safely from Your Dog, or ask your vet to show you how to safely remove them if you have concerns.

It is also recommended that you contact your vet after you have safely removed a tick to check if there should be any additional steps taken.