During warm temperatures and hot weather months, blue-green algae blooms can suddenly grow in freshwater lakes, rivers, or waterways. It is sometimes found in saltwater near river mouths.

Avoiding areas contaminated with blue-green algae is extremely important, as contact with toxic blooms can potentially be fatal for dogs and people.

Blue-green algae, or cyanobacteria, grows in warm, slow-moving or still water. It is found predominantly in freshwaters throughout the world. It can also be found in saltwater around river mouths (deltas) and inlets. There are several species of cyanobacteria. Some species are non-toxic, but some species can house poisons called called cyanobacterial toxins or cyanotoxins.

Cyanobacterial toxins are the naturally produced poisons stored in the cells of certain species of cyanobacteria. These toxins fall into various categories and are considered among the most powerful natural poisons known. Some are known to attack the liver (hepatotoxins) or the nervous system (neurotoxins); others simply irritate the skin or affect the gastrointestinal system. These toxins are usually released into water when the cells rupture or die.

One group of toxins produced and released by cyanobacteria are called microcystins because they were isolated from a cyanobacterium called Microcystis aeruginosa. Microcystins are the most common of the cyanobacterial toxins found in water, as well as being the ones most often responsible for poisoning animals and humans who come into contact with toxic blooms.

Any of the cyanobacteria toxins can be harmful to people and dogs, as well as other animals, and these toxins have no known antidotes. Blooms containing even one species of toxic cyanobacteria will be poisonous and potentially dangerous. Because there’s no obvious way to tell if a particular bloom is toxic, water samples have to be analyzed in a laboratory before a body of water can be declared safe.

The earliest reliable account of a cyanobacterial bloom dates back to the 12th century and the toxic effects of cyanobacteria on livestock have been recognized for more than 100 years. Cyanobacterial blooms seem to be linked to nutrient-rich water bodies, such as water that contains a lot of phosphates from detergents and phosphate fertilizers. As agricultural, industrial and residential pollution (high in phosphates) finds its way into rivers and lakes, the presence of blue-green algae blooms is not likely to go away any time in the near future. 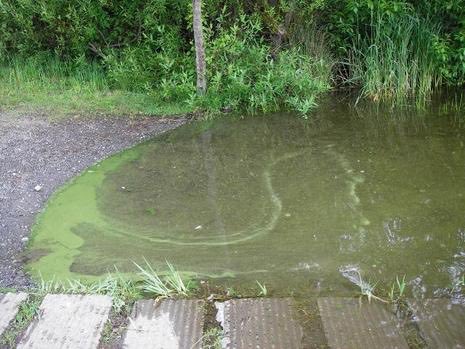 Usually contaminated water will have a neon-green like sheen or look like “unsightly pea soup” and may give off a foul smell, usually a strong musty or earthy odour. Blooms can be blue, bright green, brown, or red and may look like paint or a neon sheen floating on the water.

Some cyanobacterial blooms can look like foam, scum, or mats that lie on the surface of fresh water lakes and ponds. Some blooms may not affect the appearance of the water. The highest concentrations of toxins are usually found in blooms and scum on the shoreline. These dense accumulations pose the greatest potential risks to people and pets.

What happens if a person or dog comes in contact with a toxin?

If the blue-green algae bloom produces high volumes of toxins, then touching it can cause rashes and other skin irritations as well as itchy nose, eyes, and throat. Ingesting it can cause diarrhea and vomiting. At high enough levels, toxins can cause liver and nervous system damage. In the case of small children or pets, due to their body mass, the toxins can be fatal. Dogs are particularly susceptible to the toxic algae if they get it on their fur and skin and ingest it by drinking the water or licking the algae off their fur. 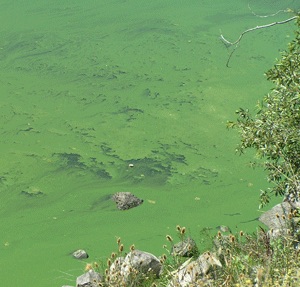 Potential symptoms in dogs following exposure to blue-green algae toxins can include:

Dogs exposed to a neurotoxin variety will develop symptoms as soon as 15 to 20 minutes later. The nerve toxin will act on a dog’s system rapidly, killing them within 30 to 60 minutes after leaving the water. Other species of blue-green algae that contain hepatotoxins will attack the liver and death can occur within 4 to 24 hours after exposure. Some dogs may be fine after swimming in blue-green-algae infested waters, only to develop symptoms after ingesting the toxins when they clean algae from their coats.

What to do if your dog is exposed to cyanobacterial toxins

Although there is no known antidote to these toxins, supportive care may keep an animal alive. You haven’t much time to act so get your dog to emergency veterinarian care immediately.

Some vets may administer atropine to regulate the animal’s seizures. Because the toxins are excreted rapidly from the body within a few days, animals that survive the initial tissue damage have a good chance for recovery.

Precautions you can take

As blooms can virtually spring up overnight, be viligant and watch for signs of the algae. The blooms are not anchored, so they can move from one location to another through wind and water action.

If you suspect a bloom, it’s best to report it to local government and/or environmental agencies which are usually responsible for monitoring and testing freshwaters.

If your dog when off-leash is prone to run ahead of you and into water without your signal, keep your dog on-leash until you have had a chance to check the water before letting him/her play or swim in it.

Especially in summer months or warm areas and in areas that have had advisories in the past, taking a few precautions can avoid injury. Hunters should carry plenty of fresh clean water for their dogs in the field and waterfowl hunters should limit their hunting to areas where the water is free of infestation.

What if an advisory is issued?

Advisories and warnings are usually issued and signposted at the affected waterways if toxins are detected and exceed allowable limits. Advisories will alert you to the severity of the bloom and will be updated regularly as to if the water should be avoided or is safe. Here are the usual precautions to follow if toxic blue-green algae is detected:

Finally, if you live near freshwater lakes, ponds and rivers you can also take a few steps to help reduce the nutrient loading of your local ponds and lakes.

And remember to have a safe and fun time enjoying the lakes, rivers and streams with your dog.

How to Massage Your Dog

How to Make Delicious Ice Cream For Dogs

How to Identify Calming Signals in Dogs

How to Brush Your Dog’s Teeth and Prevent Periodontal Disease