Bloat in dogs is a serious and life-threatening condition that requires immediate medical attention. Many dogs die from it, as it is difficult for many pet parents to recognize the signs. Recognizing the symptoms of bloat could save your dog’s life, as the condition progresses very quickly, and minutes can make the difference between life and death.

Also known as gastric dilatation, gastric dilatation-volvulus (GDV), or twisted stomach, bloat is a medical emergency that up to 40% of dogs die from, even if they get immediate care. Bloat causes a dog’s stomach to fill with air or fluid.

The swelling stomach puts pressure on other internal organs, such as the lungs, which causes the dog to have difficulty breathing. Eventually the condition may decrease blood supply to a dog’s vital organs. 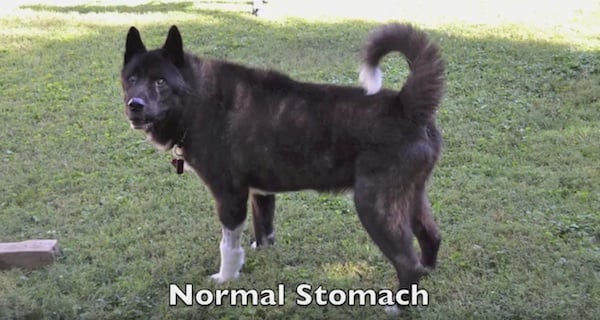 This is Roscoe the Akita as he normally looks.

The increased pressure and size of the stomach may have several severe consequences, including: preventing adequate blood return to the heart from the abdomen, loss of blood flow to the lining of the stomach, and rupture of the stomach wall.

As the stomach expands, it may also put pressure on the diaphragm preventing the lungs from adequately expanding, which leads to decreased ability to maintain normal breathing.

The stomach can become dilated enough to rotate in the abdomen, a condition called volvulus. The rotation can occasionally lead to blockage to the blood supply to the spleen and the stomach wall, requiring surgical removal of the dead tissues. Most of these canine patients are in shock due to the effects on the entire body. 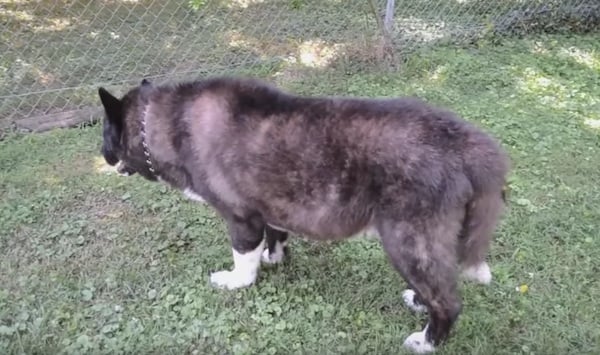 In this photo, Roscoe’s stomach is swollen due to bloat. Note the hunched posture and swelling around the stomach.

The treatment of volvulus involves stabilization of the patient, decompression of the stomach and surgery, to return the stomach to the normal position permanently (gastropexy). At the same time, an evaluation of the abdominal organs for damage and appropriate treatment are determined at the time of surgery.

As gastric dilatation worsens and full-body effects become prolonged, many secondary complications may occur. Respiration and cardiac output are diminished throughout the course of the disease, leading to poor oxygen delivery to many tissues (hypoxia). This leads to cell death in the liver, kidneys, and other vital organs. Cardiac arrhythmias (abnormal heart beats) are commonly seen because of the hypoxia.

Additionally, the lining of the entire gastrointestinal tract is at risk of cell death and sloughing. As the condition progresses, toxins may be increasing locally and when gastric dilatation is relieved, these toxins may circulate through the body resulting in additional cardiac arrhythmias, acute renal failure, and liver failure. Bacteria also commonly gain access to the blood during this condition leading to bacteremia (bacteria in the blood) and sepsis.

Several studies have been published that have evaluated risk factors and causes for bloat in dogs. This syndrome is not completely understood, however, several factors are considered to be associated, including:

Dogs as young as 10 months and as old as 14 years have been diagnosed with bloat.

Nearly all breeds of dogs have been reported to have had gastric dilatation with or without volvulus. Some breeds appear to be more commonly affected, including:

Bloat progresses very quickly, and recognizing the symptoms in your dog quickly can save your dog’s life. Initial signs are often associated with abdominal pain. These can include but are not limited to: 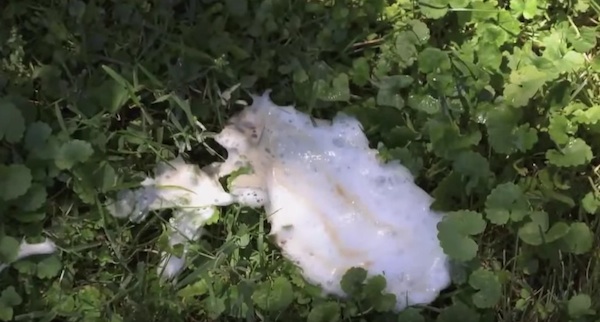 Thick, slimy saliva produced by retching with the onset of bloat.

As the disease progresses, dogs affected with bloat may begin to pant, have abdominal distension, or be weak, recumbent and collapse. Often, dogs will also have elevated heart and respiratory rates, poor pulse quality, and poor capillary refill times.

The following video demonstrates dog in the middle to late-middle stages of bloat. The Akita named Roscoe had just arrived at his foster home with his rescuer. They were filming his arrival, and unknown to them at the time, he was already in the early stages of bloat.

The weather was pleasantly warm, not hot, as this video was being filmed.

It should be noted that nobody with Roscoe that day had ever witnessed a dog with bloat. As soon as they realized something was wrong he was rushed to the emergency vet and his life was saved. Roscoe was very lucky that his new foster family acted quickly even though they had no idea what they were seeing.

“I can tell you from personal experience that we can talk to you about it forever, but until you actually experience it, it is very difficult to recognize,” YouTuber DancingAkitaLady wrote in the posted video. “They say a picture is worth a thousand words and in this case the video is priceless for its teaching value.”

That’s why the following video is so important as it helps people learn and recognize the signs of bloat. Please note, the video may be hard to watch, but it has saved lives, as many commenters on the video have attested.

Early detection and treatment of bloat is critical to survival. Most veterinarians require initial blood work that includes a complete blood count (CBC), serum chemistry, and a urinalysis. These tests help determine the nature of the metabolic disturbances that may be concurrently happening. It also allows the veterinarian to rule out certain diseases which may mimic the clinical signs of gastric dilatation.

Additionally, abdominal radiographs (X-rays) are used to confirm a diagnosis and determine the extent, or stage, of bloat. An electrocardiogram (ECG) is used to evaluate the presence of cardiac arrhythmias (commonly seen later in the disease course). Blood gas analysis is also commonly performed to evaluate the nature and severity of the respiratory compromise.

Once admitted into care, stabilization of the dog is paramount and often begins with intravenous fluids and oxygen therapy. Gastric decompression often follows, which includes the passing of a tube down the dog’s esophagus into the stomach to release the air and fluid accumulation.

This can be frequently followed with lavage (flushing of water) into, and out of, the stomach to remove remaining food particles. In certain cases where this is not possible, a needle or catheter may be placed into the stomach from outside the body to release air.

If a dog is diagnosed with gastric dilatation, surgery is usually recommended, depending on stability of the dog and at the discretion of the surgeon. Surgery involves full exploration of the abdomen and de-rotation of the stomach.

Additionally, the viability of the stomach wall, the spleen, and all other organs will be determined. Removal of part of the stomach wall (partial gastrectomy) or the spleen (splenectomy) is occasionally performed. Once the stomach is returned to the normal position in the abdomen, it should be fixed to the body wall (gastropexy).

So how can you avoid your dog getting bloat? Although the exact cause of bloat is unclear, the following precautions are recommended:

As with any medical condition with your pet, seek the advice and medical expertise of your veterinarian if you have any questions or concerns about bloat and how to prevent it.

Watch As 35 Great Danes Enjoy a Walk in The Snow

Great Dane Goes On A Kayak Ride With Dad